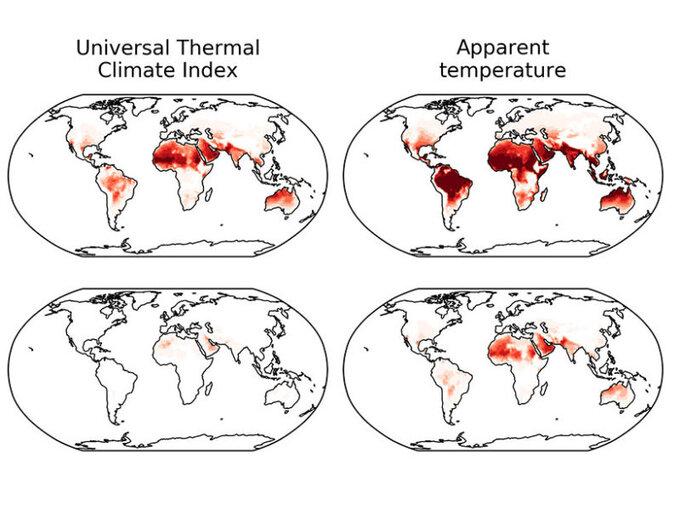 These maps show the frequency with which three heat stress indicators exceed their “very high” and “extreme” thresholds for a global warming level of 3°C, which is the most likely outcome given current policies . While there is a clear trend of increasing high–heat stress frequency with greater warming, how that stress manifests depends on the selected indicator.

As the planet warms under the effects of human-caused climate change, prolonged periods of high temperatures are projected to become a significant public health challenge. The elderly are often more susceptible than others to the effects of temperature extremes, so the aging population worldwide may exacerbate this trend. To quantify the level of danger posed by particular weather conditions, researchers have developed a series of heat stress indicators (HSIs), the most commonly known of which is the NOAA Heat Index. This index and other HSIs measure how hot it feels when other factors, like relative humidity, are taken into account.

Despite myriad indicators, past work has suggested that no one indicator produces an overall better prediction of negative health outcomes for a given set of weather conditions. Rather, different HSIs can help quantify specific outcomes, such as an increase in mortality or a decrease in worker productivity due to occupational heat exposure. To better understand how these indicators may respond to the predictions of current-generation climate models, Schwingshackl et al. computed the evolution of eight prominent HSIs based on a series of models.

The authors selected indicators whose inputs consist of temperature, pressure, and humidity and computed the daily value of each HSI across 24 climate models from 1981 to 2100. To show changes in HSIs for different global warming levels, they used historical data and a high-emissions climate scenario to cover the full range of potential future warming.

All HSIs increased during the modeled period, with most increasing faster than the change in global mean temperature. There is, however, considerable spread in the projected magnitude of the growth, with some indicators increasing only a little and others changing severely.

To indicate the potential risk to human health, the authors applied four levels of threshold values that are unique to each HSI and are based on existing literature assessments regarding the impacts of heat stress. The researchers calculated the frequency with which each indicator would exceed its outcome-defined thresholds. Because each HSI had its own unique threshold values, there was high indicator-to-indicator variance, but a trend of more days exceeding higher thresholds was clear. The amount of increase was also geographically divergent. For example, some regions, such as central Europe, experienced few additional high-HSI days, whereas other places—like Southeast Asia—had many more.

The paper argues that a simple temperature-based indicator can be a good approximation for trends in HSIs. At the same time, the authors note that it is challenging to directly compare one HSI with another, especially on a global scale. Populations are acclimatized to heat in different ways in various places, so it is important to select an indicator representative of what needs to be measured and where. (Earth’s Future, https://doi.org/10.1029/2020EF001885, 2021)

Hundreds of millions of poor menaced by 'silent killer': heat