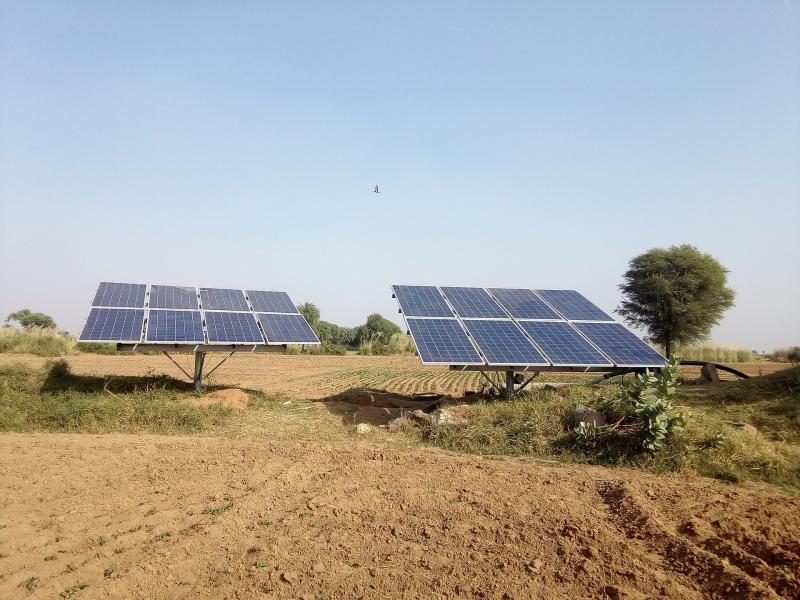 CHIKWAWA, Malawi — Residents of Mwalija village received a rude awakening when their homes were rattled and flooded by Cyclone Idai in March.

"It was a scary situation and we rushed to the site where there is a solar panel," said Hannah Longeya, pointing at the fence surrounding the solar power system on higher ground.

"The water reached neck height," she said, adding that some people were forced to hang onto tree branches.

The small solar plant, installed by international development charity Practical Action with European Union funding in 2016, sits on a raised area close to the Shire River, a major source of flooding in this part of southern Malawi.

But the UK-based aid agency said the solar panels survived the powerful cyclone due to forward planning, which it hopes will pay off as climate change brings more extreme weather.

The metal stands holding the solar panels are 15 cm (6 inches) thick and sunk deep into the soil, as well as reinforced with concrete, so they were able to withstand Idai's high winds and heavy rain.

Now with the solar installation having protected villagers in Chikwawa district from the storm's immediate danger, they are hoping it can help them get their lives back on track faster.

The solar micro-grid was supplying power to an irrigation scheme, a school, a clinic and a business development centre.

Villagers have now relocated almost 3 km (1.86 miles) from their damaged homes, where they hope they will be safer from future extreme weather. But they want to come back to their land and start farming again.

Local authorities are also considering extending the power lines from the solar micro-grid to serve the villagers' new homes.

The storm made landfall in mid-March near Beira City in Mozambique and then barreled westwards over eastern Zimbabwe, also causing massive floods in Malawi.

It killed more than 1,000 people in the three countries and left nearly 3 million in need of humanitarian aid.

A massive relief operation, led by U.N. agencies and international humanitarian groups, has assisted about 732,000 survivors in Malawi with emergency food, as well as providing them with clean water, sanitation and other essentials.

"We must ensure that climate resilience is at the centre of all future development work so that people have the skills, tools and knowledge to cope with, and recover from, disasters," he said in emailed comments.

"If the aid community, along with national governments and international institutions like the U.N. and the World Bank don't approach things differently, millions of dollars of investment will continue to be lost," he added.

A number of Practical Action's aid projects were affected by the cyclone, including solar-powered irrigation and micro-grids in Zimbabwe and Malawi - but 85 percent survived, it said.

Victor Chambayika Mhango, Practical Action's Malawi representative, told the Thomson Reuters Foundation the areas where it works have a long history of flooding, which was considered in the design of its solar irrigation systems.

"This forms part of disaster preparedness that Practical Action advocates to ensure that technologies respond to local context and serve their purpose even in the face of disasters such as the recent cyclone," he wrote in an email.

But in one area of Chikwawa district, a solar-powered water tower erected by Practical Action which provided clean drinking water for a whole community collapsed and will need to be rebuilt, as it had not been erected with storm risks in mind.

Villager Longeya, chairperson for the irrigation component of the Mwalija solar project, said the 60 or so solar panels in the array had changed local people's lives.

"We grow different crops like beans, tomatoes and maize, and after selling (them) we support our families. Our children have also benefited as they were using the lights to study. We were also privy to current affairs by watching television," she said.

But the mother of four - whose newly built house had just been connected to the solar micro-grid before the storm - said the family had to move, along with about 100 other villagers, because everything apart from the solar system had been damaged.

Mhango said a humanitarian response team had identified rehabilitation of solar irrigation schemes in the affected areas as a priority to ensure households could recover quickly.

While Longeya and other villagers in Mwalija were still desperate for food and shelter, like thousands more in the area, they hoped their irrigation scheme and continued access to solar power would enable them "to start a new life".

In Mulanje District, also in southern Malawi, a local energy charity learned the hard way in 2016 when 40 days of heavy rain destroyed its small-scale hydropower plant located on Mulanje Mountain.

"Our first power plant got washed away and our three guards died in the process. It was a bitter experience," Arnold Kadziponye, project coordinator for the Mulanje Renewable Energy Agency, told the Thomson Reuters Foundation.

"Our charity and the community learned the importance of preventing future damages," he added.

One of the agency's three mini-grids now supplies power to more than 800 households, eight maize mills, five schools and a local clinic.

And the watershed is managed better to keep the power plants safer from extreme weather. To that end, 20,000 trees have been planted, and bamboo and other vegetation introduced to cover the ground and prevent soil washing away.

Local communities have established tree nurseries to support the effort, realising how looking after the environment also helps maintain their incomes, Kadziponye said.

The measures put in place to protect the hydropower plants against storms worked well in Cyclone Idai, he added, as they survived largely intact.

Cyclone Idai showed how some countries battle to handle disasters

Devastating floods over Malawi – An experience to learn from

Lightning strikes: How installing a modern lightning detecting system in Malawi is saving lives and livelihoods