Tsunamis are one of the most terrifying natural events that the world experiences. The series of waves caused by the displacement of a large volume of water can be caused by any number of events, including earthquakes, underwater explosions, landslides or even meteorite impacts.

On the coastline, the resulting waves evolve from unnoticeable to devastating, reaching tens of metres in height before they hit the land. On December 26, 2004, a tsunami in the Indian Ocean – triggered by an underwater earthquake which had a magnitude of 9.1-9.3 – reached 30 metres in height. The waters devastated parts of Indonesia, Sri Lanka, the Maldives, Thailand, and other places, and its effect was seen as far away as South Africa. More than 230,000 lives were lost and many more people remain missing to this day.

When triggered, a tsunami can hit the coast within minutes, and up to a few hours at best. At present, early warning systems rely on measuring the movement of dart buoys – which record changes in the sea level – or assessing the bottom pressure of the propagating tsunami. The problem is that these systems require the tsunami to physically reach the measurement location. The buoys could be installed in the deep ocean – but this requires an unrealistic number of buoys. The second option is to install the buoys along the shoreline, but due to the high speed of the tsunami, that would leave no warning time for people on the land. 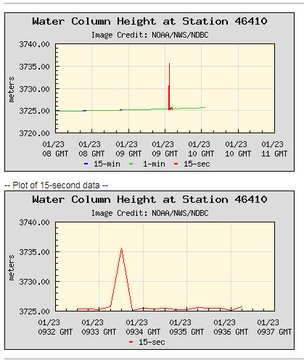 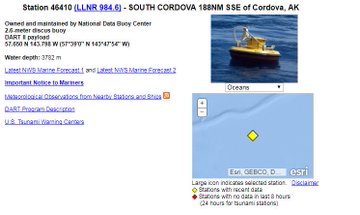 Instead, we have developed a third option to increase the amount of tsunami warning time – by using acoustic (sound) waves. Acoustic waves that radiate from an earthquake can travel much faster than the tsunami that has been triggered. And for longer distances – thousands of kilometres – too, carrying information on the earthquake itself as well as the forthcoming tsunami waves.

Using standard hydrophones (underwater microphones) we can record these sound waves long before the tsunami arrives, and regardless of the direction that the tsunami will travel. The sound signals come from changes in pressure, so what we actually analyse is a series of data on how the pressure is changing over time.

Though buoys also detect changes in pressure, the tsunami front must actually reach the buoys for us to know that there is an elevation in the water surface. By using hydrophones, however, you only need to capture the sound signals. These signals travel radially so it doesn’t matter if the tsunami front is heading towards the hydrophone location or away from it, the sound waves will be recorded either way.

Though the idea of using sound waves to predict tusnamis has been put forward previously the key to our idea is a new mathematical method that can be used to analyse these recorded sound signals in near real-time. It is based on the assumption that the underwater faults which cause earthquakes are slender – the width is much smaller than the length, which is the case in many known eruptions. By assuming this, we can then start to figure out how the sound has evolved as it moves.

Once we work this out, we can go back and use the pressure signals to retrieve the fault’s main properties, such as its location, length, width, time, duration, speed, elevation, and orientation. Using these, we can then not only warn of a tsunami but also more accurately estimate its size long before it reaches the shoreline.

With these data at hand, we can evaluate the impact the tsunami will have on the shoreline and provide a rapid threat assessment within just a few minutes of the initial signal being recorded.

While we work to adapt our method so that it will run automatically, we anticipate that governments around the world will take the idea and use it to create a new, quicker, early warning system for coastal communities.