Australia: To fight the catastrophic fires of the future, we need to look beyond prescribed burning

By James Furlaud and David Bowman

California is burning – a sentence we’ve heard far too often this year. Sydney is currently on bushfire alert, as firefighters battle a fire in the Hunter Valley region and temperatures are set to top 40℃.

A cocktail of factors, from climate change to centuries of ignoring indigenous burning practises, means that catastrophic fires are likely to become more common.

One of Australia’s favourite fire prevention measures is prescribed burning – using carefully controlled fires to clear out flammable materials. We’re almost obsessed with it. Indeed, it seems the outcome of every major inquiry is that we need to do more of it.

The Royal Commission inquiry that followed Victoria’s 2009 Black Saturday fires recommended that 5% of all public land in Victoria be treated per year – a doctrine that was subsequently dropped due to impracticality.

Yet our research, published today in the International Journal of Wildland Fire, modelled thousands of fires in Tasmania and found that nearly a third of the state would have to be burned to effectively lower the risk of bushfires.

The question of how much to burn and where is a puzzle we must solve, especially given the inherent risk, issues caused by smoke smoke and shrinking weather windows for safe burning due to climate change.

Why use computer simulations?

The major problem fire science faces is gathering data. Landscape-scale experiments involving extreme fire are rare, for obvious reasons of risk and cost. When a major bushfire happens, all the resources go into putting it out and protecting people. Nobody has the time to painstakingly collect data on how fast it is moving and what it is burning. We are therefore restricted to a few limited data sources to reconstruct the behaviour and impact of fire: we can analyse the scar on the landscape after a fire, look at case studies, or run simulations of computer models. 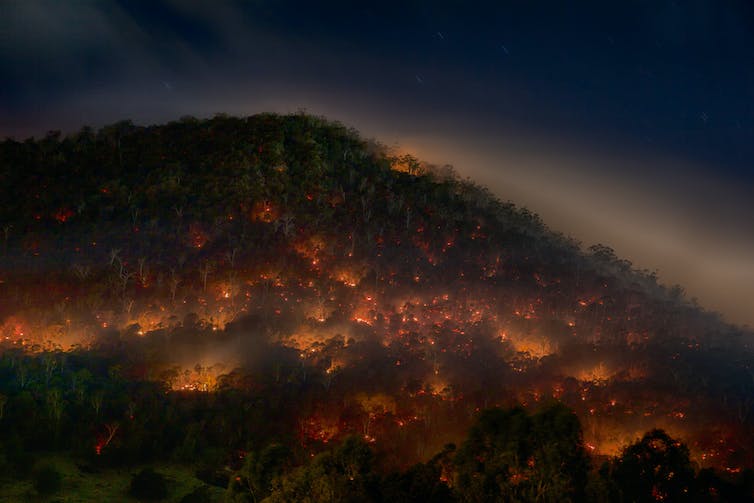 To answer these questions, we create models using mathematical equations to simulate the behaviour of fires across actual landscapes. These models include the effects of vegetation type, terrain and fuel loads, under specific weather conditions. If we simulate thousands of these fires we can get an idea of where fire risk is the highest, and how effective prescribed burning is at reducing that risk.

The island of Tasmania offers the perfect study system. Self-contained, with a wide array of vegetation types and fire regimes, it offers an ideal opportunity to see how fire behaves across a diverse landscape. Perhaps more interestingly, the island contains large areas of flammable landscape surrounding globally unique ecosystems and numerous towns and villages. Obviously, we cannot set fire to all of Tasmania in real life, but computer simulations make it possible!

So, encouraged by the Tasmanian Fire Service, who initiated our research, we simulated tens of thousands of fires across Tasmania under a range of prescribed burning scenarios.

Prescribed fire can be effective, in theory

The first scenario we looked at was the best-case scenario: what happens if we perform prescribed burning on all the vegetation that can handle it, given theoretically unlimited resources? It is possible this approximates the sustained and skillful burning by Tasmanian Aboriginal peoples.

Wildfire simulations following this scenario suggested that such an approach would be extremely effective. Importantly, we saw significant reductions in fire activity even in areas where prescribed burning is impossible (for example, due to the presence of people).

Unfortunately, this best-case approach, while interesting from a theoretical perspective, would require prescribed burning over more than 30% of Tasmania in one year.

We also analysed the effects of 12 more realistic scenarios. These realistic plans were less than half as efficient as the best-case scenario at reducing fire activity.

On average, 3 hectares of prescribed burning would reduce wildfire extent by roughly 1ha in grasslands and dry forests.

In other flammable Tasmanian vegetation types like buttongrass sedgelands and heathlands, the reduction in wildfire was even smaller. This is obviously better than no prescribed burning, but it highlights the fact that this is a relatively inefficient tool, and given the costs and potential drawbacks, should be used only where it is most needed.

This is a fundamental conundrum of prescribed burning: though it is quite effective in theory, the extent to which we would need to implement it to affect fire behaviour across the entire state is completely unachievable.

Therefore, it is imperative that we not just blindly burn a pre-ordained fraction of the landscape. Rather, we must carefully design localised prescribed burning interventions to reduce risk to communities.

We need a multi-tool approach

Our study has shown that while prescribed burning can be quite effective in certain scenarios, it has serious constraints. Additionally, while we analysed these scenarios under bad fire weather, we were not able to analyse the kind of catastrophic days in which the effect of prescribed burning is seriously reduced, with howling dry winds and stupefying heat.

Unfortunately, due to climate change, we are going to see a lot more catastrophic days in the future in Tasmania and indeed globally.

In Hobart this is of particular concern, as the city is surrounded by tall, wet eucalypt forests that have had fifty years grow dense understoreys since the 1967 Black Tuesday fires. These have the potential to cause some of the most intense fires on the planet should conditions get dry enough. Prescribed burning is impossible in these forests

To combat fire risk we must take a multi-pronged approach that includes innovative strategies, such as designing new spatial patterns for prescribed burning, manually removing fuels from areas in which prescribed burning is not possible, improving the standards for buildings and defensible spaces, and most importantly, engaging the community in all of this.

Only by attacking this problem from multiple angles, and through close collaboration with the community and all levels of government, can we effectively face our fiery future.