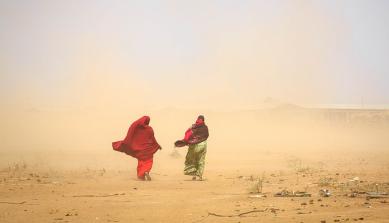 By Bruce Campbell and Lisa Goddard

New research indicates that the Syrian refugee crisis has roots within climate change. How can we ensure that history does not repeat itself in the coming decades of climate turmoil?

It is widely held that climate change will have negative impacts on agricultural communities. Now, research is supporting the theory that climate impacts will catalyze tragedy among vulnerable populations. In a new paper, 'Climate change in the Fertile Crescent and implications of the recent Syrian drought', Kelley et al. argue that “human influences on the climate system are implicated in the current Syrian conflict,” and man-made climate change was a likely contributor to the severe drought that gripped Syria from 2007 to 2010. The drought led to crop failure and worsened rural poverty, which helped drive mass migration from rural to urban areas. The authors describe how this process put pressures on Syria’s big cities, which were already experiencing rapid population growth rates and an influx of over one 1.5 million Iraqi refugees. The Syrian government’s failure to address the overcrowding, unemployment, lack of infrastructure and other troublesome elements fueled the fire of unrest among the population.

These unfortunate developments are by no means unique, as history books are rife with narratives linking environmental issues and conflict. Similar scenarios have occurred in settings as diverse as the United States Great Plains in the 1930s, to the Sahel region from the 1960s to 1980s. Even the collapse of the Mayan society has been linked to recurrent drought, mass migration and subsequent conflict over resources.

Teasing out cause and effect

The research base surrounding the links between environmental change, migration and conflict is fraught with controversy. Tracing out the complex circumstances that influence people’s decision to upend their lives and embark on uncertain and potentially dangerous journeys can be extremely difficult, and the lack of systematic data on the phenomenon complicates matters. Motivations can be tied to diverse and interplaying factors, including economic opportunities, land degradation, political persecution and overpopulation.

Climatic extremes and man-made climate change influence the underlying socioeconomic conditions that motivate people to move. This can be through extreme weather events, which abruptly and forcefully displace people from their land, or through more gradual processes such as sea-level rise and long-term drought. According to the Internal Displacement Monitoring Centre, since 2008, an average 26 million people per year were internally displaced due to natural disasters, at the global level. Over one billion people were hit by drought between 1994 and 2013, despite the fact that droughts account for only 5% of extreme events over the period.

This year, El Niño could make the situation worse, as drier-that-normal conditions have been forecast for much of southern Africa, northern South America, and Southeast Asia. Though El Niño events are not the only source of climate variability, they do provide enhanced ability to predict where weather and climate hazards are likely to strike. El Niño events facilitate and test our ability to respond to climate extremes that may become more frequent in the coming decades.

The impacts of drought are far-reaching, affecting food prices and markets in surrounding regions and even the global economy. In some areas, drought can affect regional water availability and hinder energy production from hydropower plants. At the other end of the spectrum is the overabundance of water: the 2006 Stern Review warns that 200 million coastal inhabitants will be displaced by 2050 due to rising sea levels and attendant inundation from storm surge.

The Middle-East and North African (MENA) region is already one of the least water-secure areas in the world. In the coming decades, climate change and associated temperature rise are forecasted to have further significant negative impacts on food and water security (see Hötzl, 2008; Chenoweth et al., 2011; Evans, 2009). More frequent extreme weather events and sporadic rainfall will threaten the region’s already stressed water supply, and increased drought occurrence is expected to lower agricultural yields. Sea-level rise may displace millions of people in the region’s low-lying coastal areas as well.

Migration is a legitimate form of adaptation to climate change. When weather and climate anomalies have a strong impact on the agricultural sector, rural wage levels are negatively affected. Rural to urban migration provides opportunities for better wages, and this type of migration is already prevalent in the MENA region. However, violent conflict is found to be statistically more likely to occur in urban areas experiencing rapid population growth, or pronounced levels of social and income inequality.

The key question is, with the prognosis of worsening food and water security in the MENA region, what can we do to prevent future tragedy? In the words of Cecilia Tacoli from the International Institute for Environment and Development, “It is when extreme events affect people with high levels of vulnerability that they become disasters" (Tacoli, 2011).

We need a new narrative. We must tackle vulnerability to the coming climatic extremes in a two-pronged fashion: by minimizing negative impacts on rural economies, while enhancing the absorptive capacity of cities. Providing opportunities for rural communities to remain productive on their land can curtail mass migration, slowing rural to urban migration rates in order to avoid volatile and rapid urbanization. Simultaneously, governments must work to address the social and income inequalities that arise when rural to urban migration occurs.

We need to invest in helping farmers produce more on their existing land, using sustainable approaches that are best suited to local agro-ecological conditions. This can improve income, especially when farmers can access climate information and seasonal forecasts that help them decide what to plant and when. Better early warning system would allow farmers to prepare for impending extreme events. Interventions such as the Ethiopian Government’s Productive Safety Net Programme can provide aid to households in need while building community assets, allowing rural populations to avoid migration and instead make household investments that build resilience. In addition, climate-based index insurance can serve as a financial safety net to small-holder farmers, by allowing them to act on climate information and seasonal forecasts, which indicate a shift in the odds of the upcoming seasonal climate.

With proper foresight, and better understanding of the connections between climate change, food security and migration, world leaders can address one of the main contributors to this crisis, and create better lives and futures for vulnerable people. However, tracing out the causal pathways linking these already complex issues is no easy task. We need to continue building the knowledge base on how the impacts of climate change will influence people to abandon their land. We do know that with early warning, early action can be taken towards planning and preparedness that can reduce the negative impacts on society. What systems of information and action are appropriate will likely be geographically and socially specific. It is critical that we pinpoint effective and dynamic interventions, suited to the local contexts of both rural areas and cities, which can help prevent future tragedies.

Bruce Campbell is the Director of the CGIAR Research Program on Climate Change, Agriculture and Food Security (CCAFS).

Lisa Goddard is the Director of the International Research Institute for Climate and Society (IRI).