Mount Semeru’s deadly eruption was triggered by rain and storms, making it much harder to predict The eruption of Mount Semeru in Indonesia on Saturday tragically claimed the lives of 22 people, with another 22 still missing and 56 injured. More than 5,000 people have been affected by the eruption, and more than 2,000 people have taken refuge at 19 evacuation points.

Several villages have been buried in up to 4 metres of volcanic material and debris, more than 3,000 buildings have been damaged, and Gladak Perak Bridge, which connected Lumajang with the nearby city of Malang, has collapsed.

The Volcano Observatory Notice for Aviation (VONA) has since reported further pyroclastic flows travelling down the the volcano’s slopes, and ash plumes reaching 4.5km above its summit. There are also reports of lava flows at the summit crater.

Mt Semeru is one of the most active volcanoes in Java, with activity taking place in 74 of the past 80 years. The volcano’s current eruptive phase began in 2014, with frequent emissions of ash plumes to hundreds of metres above the crater, pyroclastic flows and glowing lava avalanches.

But Saturday’s eruption was, unexpectedly, much larger than the ongoing background of activity. The Head of the Geological Agency of the Ministry of Energy and Mineral Resources, Eko Budi Lelono, said a thunderstorm and persistent rain had eroded part of the volcano’s lava dome – a “plug” of solidified lava at the summit. This caused the dome to collapse, triggering the eruption.

Lava dome collapse is a common trigger of volcanic eruptions, and has been behind some of the deadliest eruptions in history. Collapse of the unstable dome of solidified lava is rather like taking the top off a fizzy drink bottle, depressurising the system and triggering an eruption. Lava domes sometimes collapse under their own weight as they grow, or they can be weakened by external weather conditions, as was evidently the case at Mt Semeru.

The fact that Saturday’s eruption was triggered by an external factor, rather than conditions inside the volcano, would have made this event harder to forecast.

Volcano monitoring typically relies on signs of increased unrest inside a volcano. Increased earthquake activity can be a sign that magma is moving around beneath the ground. Another warning sign is a change in the temperature or type of gases emitted. Sometimes, small changes in the shape of the volcano or lava dome can be detected on the ground or from satellites.

Another fatal, hard-to-predict explosive eruption happened in 2019 at Whakaari (White Island) in New Zealand. That event was thought to have been driven by an explosion of pressurised steam rather than by magma, which made it challenging to predict.

As the world’s population grows, more and more people are living close to active volcanoes. According to one estimate, more than a billion people (14% of people on the planet) live within 100km of an active volcano. 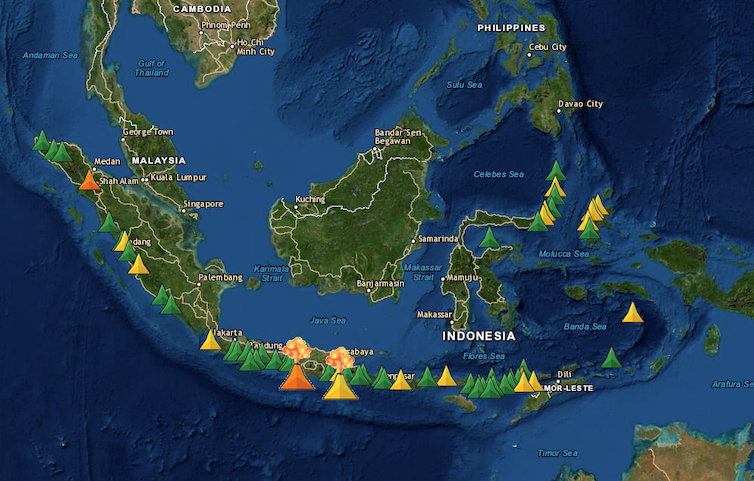 The fertile soils typically found near volcanoes mean these communities need to balance their livelihoods with the risks. Keeping an eye on dozens of active volcanoes poses a continuous challenge to Indonesia’s volcano monitoring and disaster management authorities.