On November 3, 2020, Hurricane Eta made landfall as one of the most powerful hurricanes to hit Central America in years. The category 4 storm destroyed hundreds of homes, killed more than 100 people, and brought torrential rains that triggered large and numerous landslides in Guatemala and Honduras. Less than two weeks later, Hurricane Iota—an even more powerful category 4 storm—nearly retraced Eta’s path.

Within hours of Eta’s landfall and flooding rains, researchers at NASA’s Goddard Space Flight Center worked to predict landslides and map the storm’s aftermath. One team assessed potential landslide hazards using a computer model. Another team analyzed satellite data to map the resulting landslides, some of which were successfully predicted by the model. The NASA Earth Science Disasters program shared the information with national and international emergency response agencies to provide better insight of the hazards to personnel on the ground. The teams are currently running those landslide analyses again for areas hit by Hurricane Iota.

The deadliest of the landslides after Eta occurred in San Cristobal Verapaz, Guatemala, on November 5. Extreme rainfall triggered a massive landslide that may have entombed more than 100 people and buried much of the small farming village of Quejá. The images at the top of this page show the Quejá landslide and smaller nearby landslides as observed on November 10, 2020. The areas were computed by NASA’s Semi-Automatic Landslide Detection (SALaD) system, which uses machine learning to detect landslides from satellite imagery; in this case, the team used the European Space Agency’s Sentinel-2 satellite.

“The program found about 30 landslides in the area where the Quejá landslide occurred,” said Pukar Amatya, an associate scientist with USRA at NASA Goddard and leader of the mapping effort. Fortunately, many of the slides occurred in remote areas, away from towns and villages. 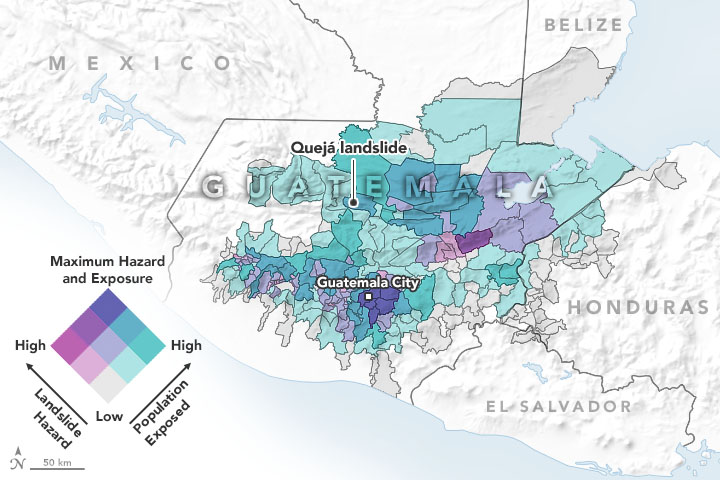 The map above shows the predicted landslide hazard on November 5 for Guatemala, as determined by NASA’s Landslide Hazard Assessment for Situational Awareness (LHASA) model. The researchers overlaid the model with district-level population data so they could better assess the proximity between potential hazards and densely populated communities. Shades of purple represent the hazard associated with landslides, with the darkest shades having the highest risk. Shades of teal depict the size of the population exposed to the risk. Areas where hazard and exposure are both elevated may experience the most severe impacts.

The LHASA model allows researchers to assess landslide hazards within hours of storms. The model incorporates rainfall data from the Global Precipitation Measurement (GPM) mission, which provides precipitation estimates around the world every 30 minutes. The model also integrates information about roadways, the presence or absence of tectonic faults, the types of bedrock, changes in tree cover, and the steepness of slopes. In the wake of Eta, the team also included some new machine learning that placed more weight on conditions that contributed to past landslides in the region, such as recent rainfall and slope changes.

The LHASA and SALaD teams also predicted landslide risk and mapped several landslides in Honduras that were not covered by news outlets. Most occurred in sparsely populated areas and were not fatal, but recording the landslide history is useful in the long-term in case people move into those locations in the future.

“The hazard model provides the first look at where huge landslides are likely to happen,” said Robert Emberson, an associate scientist with USRA who helps develop the LHASA model. “Within those areas, we can look at high-resolution imagery later to see if the landslides occurred and map the extent. It's helpful to have these two systems work in tandem.”

Both landslide projects are supported through the NASA Earth Applied Sciences Disasters program. The data and products are provided to institutions working on emergency response and recovery, such as the U.S. Southern Command, the National Coordination Center for Disaster Reduction in Guatemala, the Center of Coordination for the Prevention of Disasters in Central America and the Dominican Republic, and the United Nations Platform for Space-based Information for Disaster Management and Emergency Response.