The good, the bad and the urgent: MDB climate finance in 2020

Multilateral development banks (MDBs) play an important role in financing developing countries’ efforts to reduce emissions and protect against the effects of climate change, and 2020 was a critical waypoint for MDB climate finance. For one, it marked the due date for the climate finance targets many MDBs set in 2015. 2020 was also the year by which developed countries committed to mobilize $100 billion per year in climate finance for developing countries, with many developed countries channeling a significant share through MDBs.

Since the 2019 joint climate finance report, MDBs changed their reporting method to the World Bank’s income-based country classification system, which divides countries into “low-income,” “middle-income” and “high-income.” This is different from how the UNFCCC defines “developed” and “developing” countries, to which MDB climate finance reports up to 2018 broadly aligned. The UNFCCC definition of developing countries includes some countries the World Bank classes as high-income, whereas the World Bank’s low- and middle-income countries classification includes some countries that are classed as developed countries or economies in transition by the UNFCCC.

Unfortunately, MDB climate finance for developing countries fell by almost 5% in 2020 compared to 2019, and coronavirus response efforts prevented most MDBs from meeting their own 2020 climate finance targets.

(Note: Since their 2019 joint report, MDBs changed the way they classify countries, making it more difficult to assess how their climate finance contributes to the $100-billion-a-year goal set under the UN Framework Convention on Climate Change (see box). Where possible, we adjusted figures to align with the previous categorization of developing countries.)

With the exception of the New Development Bank (NDB), all the major MDBs have now set post-2020 climate finance targets. While the targets reflect varying levels of ambition, the adoption of new targets signals the continuing importance of MDBs’ role in meeting global climate finance needs.

NDB should adopt a post-2020 climate finance target as soon as possible, while other banks should strengthen theirs. The Inter-American Development Bank Group (IDBG), for example, adopted a target that holds climate finance steady at the top end of its pre-2020 targeted range. MDBs need to increase their targets — not decrease or maintain them.

2. Some banks took important steps toward transparency and accountability.

NDB reported certain climate finance figures for the first time this year and plans to extend its application of the climate finance tracking methodologies in years to come. It should begin reporting alongside its peer institutions as soon as possible, as it is the only remaining major MDB that has yet to do so.

Finance supporting adaptation in low- and middle-income economies increased slightly, from 34% of MDB climate finance in 2019 to 35% in 2020, in part indicating that resilience remained a priority despite the focus on pandemic response. It may also suggest that resilience was integrated into emergency response measures.

Adaptation costs nonetheless continue to outpace available funds, and the Paris Agreement calls for a balance in climate finance between mitigation and adaptation. MDB adaptation finance will need to increase rapidly to meet adaptation financing needs in developing countries. 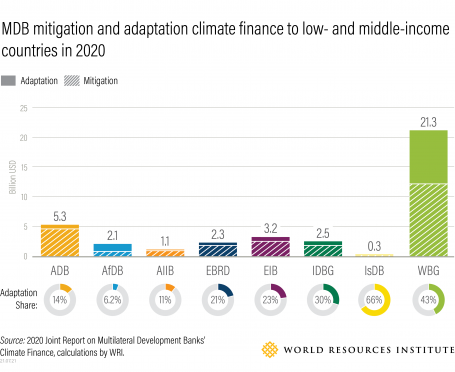 This troubling reversal comes at the worst possible moment, as there are already widespread concerns that developed countries have been unable to meet their $100-billion-a-year commitment, much of which flows through MDBs. A decline in climate finance through MDBs would require developed countries to provide even more through other channels (such as through bilateral aid and climate funds like the Green Climate Fund) to meet the goal. 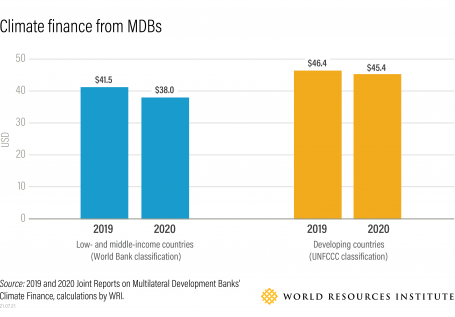 2. As MDBs helped member countries respond to the coronavirus pandemic, most failed to meet their 2020 climate finance targets.

To some extent, this result is understandable. Some emergency responses, including budget support or investments in healthcare systems and unemployment assistance, have only limited direct climate relevance. However, some banks may have missed opportunities to integrate climate into their COVID-19 response measures.

Because of the unprecedented circumstances, some banks reported on the climate finance share of operations excluding coronavirus response projects. For example, without COVID-19 response operations, climate finance reached 44% of AfDB’s overall financing, 30% of IDBG’s and 25% of ADB’s. 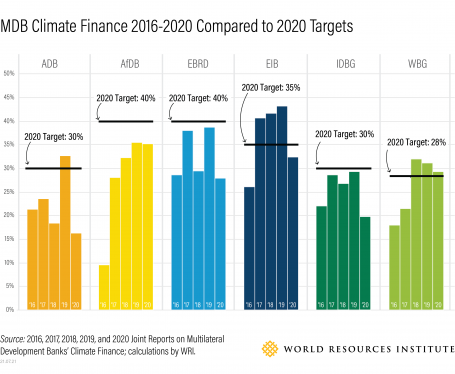 As part of their “Billions to Trillions” agenda launched in 2015, MDBs put significant emphasis on using public funding to mobilize orders of magnitude more private co-finance. The theory was that by “derisking,” or subsidizing riskier parts of deals with various types of financial instruments (for example, concessional loans, equity or guarantees), MDBs could attract private finance to projects they wouldn’t have otherwise invested in, thereby raising more money than otherwise possible. Yet MDBs have continually struggled to achieve this goal.

(Conversely, some MDBs report greater amounts of co-financing from other public sources, such as money from recipient country governments and developed country aid agencies. AfDB and AIIB reported more than $3 in other public finance for each dollar they put up.)

The failure to mobilize private finance predates the COVID-19 pandemic. The Billions to Trillions agenda is more accurately delivering billions to billions, especially as MDBs continue to rely heavily on loans instead of making greater use of equity and guarantees — an issue we raised in our first article in this series. As it begins its seventh year of implementation with consistently disappointing figures, and with growing critiques of the “derisking” approach, it is past time for MDBs to explore whether other approaches to promoting private investments in climate action — including regulation to create more attractive climate investment conditions — may be more effective. 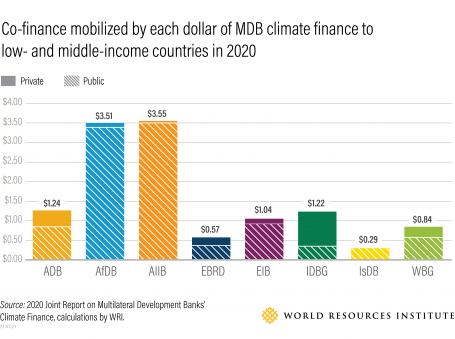 1. MDBs now face the urgent task of rapidly scaling up climate finance to make up for lost ground in 2020.

In 2020, MDBs were rightly focused on meeting their members’ immediate emergency response needs. However, many potential recovery measures offer clear opportunities to support climate mitigation or adaptation. As the MDBs support ongoing coronavirus response and economic recovery efforts, they must also maximize climate-related co-benefits through a green recovery.