Such earthquakes are called “felt events” because they may be large enough to be felt in nearby communities, including a magnitude 4.2 earthquake earlier this year near Red Deer, Alta., and a 4.5 quake last year near Fort St. John, B.C. This has led to heightened public concern.

Scientists seeking to understand the physical mechanisms of these “induced” earthquakes have puzzled over discrepancies between laboratory measurements — which indicate such events shouldn’t happen in the type of rock that is undergoing stimulation — and field observations of the earthquakes.

Now, a new study led by University of Calgary seismologists appears to have solved the puzzle. Their new model shows that injection of fracturing fluids can lead to a slow slip on a fault. Over time, this puts enough strain on another section of the fault to cause it to slip suddenly — producing an earthquake.

“Based on our model, the earthquake initiates on a part of the fault where friction conditions are unstable. In the case we studied, the earthquake occurred hundreds of metres above the hydraulic fracturing zone,” says study lead author Dr. Thomas Eyre, PhD, postdoctoral researcher in the Department of Geoscience.

“Stable fault creep in hydraulically fractured shales loads distant unstable parts of the fault capable of hosting an earthquake,” says Dr. Dmitry Garagash, PhD, professor in the Civil and Resource Engineering Department at Dalhousie University and co-author of the study.

The research team’s study, “The Role of Aseismic Slip in Hydraulic Fracturing-Induced Seismicity,” is published in Science Advances, a top-tier online journal of the American Association for the Advancement of Science.

Current theories for fluids injection-induced earthquakes postulate that increased fluid pressure is the main triggering mechanism. This can occur directly — by reducing frictional resistance of the fault — or indirectly, by changing the fault loading conditions.

Recent studies elsewhere, conducted in the laboratory or at relatively shallow depths, indicate that fault slip in shale formations occurs too slowly to produce an earthquake.

The UCalgary scientists’ new results — the first at industrial scale and for hydraulic fracturing — shows how loading of the system by fluid injection may be connected with the dynamic behaviour of fault systems in the Earth’s crust.

The simplified visualization below depicts a slider-block conceptualization of the new model for hydraulic-fracturing induced seismicity. Two blocks representing the fault system sit on a surface connected by a spring: one that slides slowly and smoothly, and the other that exhibits stick-slip behavior similar to an earthquake cycle. They are connected via a pulley system to the loading system. Fluid injection via hydraulic fracturing is simulated by filling a container with fluid. This causes the first block to slide slowly and smoothly, imitating aseismic slip. This in turn loads the spring, applying a larger and larger force to the block that is stuck until it suddenly and rapidly moves, imitating the failure behavior of an earthquake. Note that the slow slip initiates significantly before the induced seismic event. 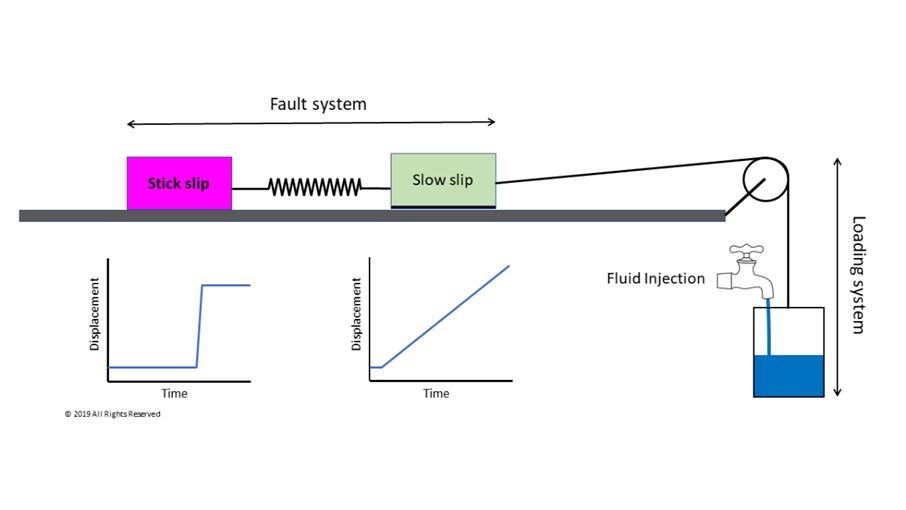 Slider-block conceptualization of the new model for hydraulic-fracturing induced seismicity.

In developing their model, Eyre led a team of UCalgary postdocs and graduate students who analyzed an extensive set of seismic and geological data. Some of the data were collected during a magnitude 4.1 hydraulic fracturing-induced earthquake on Jan. 12, 2016, near Fox Creek in northwest Alberta.

Garagash developed the physics-based numerical model of slow and fast fault slip driven by hydraulic fracturing changes and constrained by the dataset used by Eyre’s team. Modelling results and observations correlated well in terms of the size of the earthquake, the timing, and the spatial appearance of the seismicity.

Energy regulators in Alberta and other jurisdictions have introduced “traffic light” systems to reduce the risk of induced earthquakes.

In the Fox Creek area, this system includes a “red light” threshold at magnitude 4, when hydraulic fracturing operations must be halted, and a “yellow light” at magnitude 2, when companies must adjust operations to mitigate risk.

However, data acquired during the past few years indicate that not every magnitude 4 event is preceded by yellow light seismicity, which limits the effectiveness of current traffic light systems.

“Our model predicts that slow slip initiates significantly before an induced seismic event. This could lead to new ways to monitor and forecast felt seismic events,” Eyre says.

“This publication is another important scientific contribution from University of Calgary’s research initiative on hydraulic fracture induced seismicity,” says Shawn Maxwell, geophysical and geomechanical adviser at Encana. “Fault creep could potentially be an important factor in fault activation and a better scientific understanding will ultimately lead to improved mitigation strategies.”

The study was funded by the Canada First Research Excellence Fund and by the Natural Sciences and Engineering Research Council of Canada.