Harnessing the knowledge of indigenous communities for DRR

Rohit Jigyasu, International Centre for the Study of the Preservation and Restoration of Cultural Property

Indigenous peoples know a lot about disaster risk. They have learned to read the signs in the sea, the skies and wildlife to predict hazards. Direct experience with disasters has taught many communities the duration, location, time, frequency, intensity, predictability, onset and possible behaviour of the hazards linked to these events. Traditional knowledge for disaster risk reduction lies in the accumulated experience that comes with the close relationship of indigenous communities to their environment, formed through successive trials and errors over generations.

Take the case of Moken, a tribe of nomads living in the southern seas of Thailand and Myanmar. They spend at least eight months a year at sea, bartering fish and shells for rice and fuel. They tell the ‘legend of the seven waves’, which serves to perpetuate traditional knowledge of tsunamis. When the tsunami struck the coast of Thailand on 26 December 2004, they drew on this knowledge to warn tourists and others of the oncoming wave.  Similarly, the local knowledge of the indigenous tribes of Andaman Islands taught them that if the sea starts to recede, then they should also recede. This knowledge was instrumental in saving their lives, while many tourists drowned as they moved towards the receding sea.

In the Kutch region of Gujarat, I came across local knowledge on the prediction of drought based on the direction of winds. Farmers change their cropping pattern according to their predictions, based on this knowledge.

Originating from within the community, such a knowledge is passed on informally through narratives that remain in the collective conscience of the communities. The story of the Japanese village of Hiromura, struck by an earthquake in 1854 provided valuable lessons that continue to guide new generations of Japanese. A villager noticed that the well had run dry and alerted the village leader. Shortly after, a devastating earthquake struck. The leader realised that a tsunami would strike the coast and guided the villagers to higher ground. Following this event, the villagers built an embankment that has protected the village ever since, including when the Showa Nankai earthquake triggered a four-metre tsunami; the area protected by the embankment was undamaged. Japanese government continues to use this story to spread awareness of the need for preparedness against tsunamis.

Likewise, traditional technologies and construction practices often reflect adaptations to the environmental conditions, to manage local hazards using local materials. There are many examples of survival of traditional buildings during disasters caused by earthquakes, floods, cyclones and other hazards thanks to the traditional knowledge embedded in them. During the 2001 Gujarat earthquake, typical bhunga dwellings of the local Banni tribe in the Kutch region in India survived remarkably well because of their design and construction technology, while many new constructions collapsed.

Indigenous social, economic and institutional coping skills and capacities are also inherent part of the traditional knowledge systems. In every society, there are various internal social structures that help individuals and families through difficult periods. These coping mechanisms become collective instruments for organizing action on behalf of victims for disaster mitigation, preparedness, response and recovery. Following the 2015 earthquake in Nepal, local communities came together to volunteer to save traditional windows from their damaged houses, repair small shrines and community buildings (Guthis) and restart rituals and festivals such as Macchendranath Yatra., even though the communities had lost their shelter and livelihoods.

Similarly, the 2011 tsunami in Japan almost completely swept away the Shizugawa town in Minamisanriku cho. However, the main hall of the local Kaminoyama Hachimangu Shrine survived the disaster due to its location on higher ground. The shrine, through its priest, acted as the local anchor for affected communities. People got together for psychosocial support and to share community views on recovery and reconstruction. Reinstatement of rituals, festivals and crafts within a few weeks of the disaster served as the means for mutual support among community members. 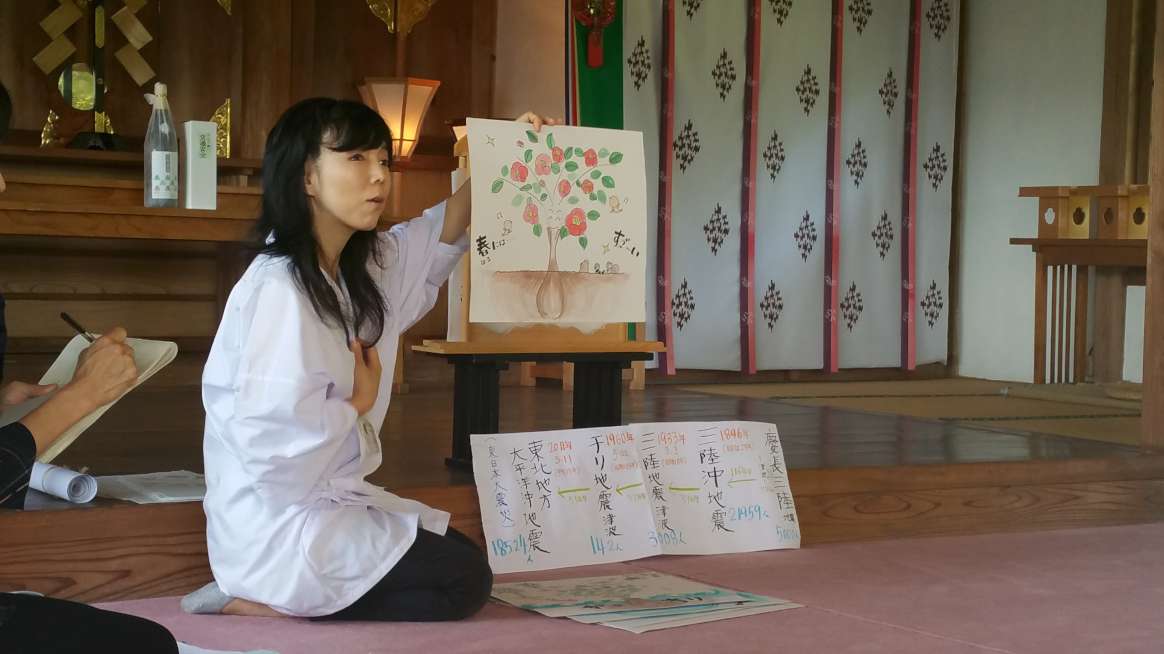 The local priest of Kaminoyama Hachimangu shrine in Minaminsanriku organized many activities to bring together communities displaced after the Tsunami following Great East Japan Earthquake in 2011. Photo: Rohit Jigyasu

Considerable research and publications exist on traditional knowledge for disaster risk reduction. However, there are much fewer practical examples that demonstrate to policy makers and practitioners the needs and perceptions of the people and how to harness this knowledge in the present social, economic and institutional context.  Traditional knowledge has always evolved in response to change. Experimentation and innovation are critical to ensure its continuity and relevance in present context. For example, during the 2001 Gujarat earthquake reconstruction, traditional artisans participated in developing innovative solutions for constructing vernacular Bhunga structures by replacing bamboo used in traditional wattle and daub structures with steel wires as the former was getting harder to find than before. In Japan, effective use of traditional social networks and management systems are common for fire prevention, including maintenance of water hydrants, regular monitoring and awareness raising.

The Sendai Framework calls for governments to employ a people-centred approach and engage directly with indigenous peoples in the design and implementation of policies, plans and standards, and to use traditional, indigenous and local knowledge and practices to complement scientific knowledge in disaster risk assessments. To provide practical guidance to countries and practitioners, UNDRR in collaboration with ICCROM[1] is developing a Words into Action guide on ‘using traditional knowledge for disaster risk reduction’. The guidance will focus on identifying, documenting and adapting traditional knowledge for the development of polices, programmes and innovative projects.

The world has a lot to learn from indigenous peoples.  Let us make sure we make full use of traditional knowledge to mitigate, adapt, prepare and respond to disaster risks.

[1] ICCROM; The International Centre for the Study of the Preservation and Restoration of Cultural Property is an Inter-governmental organization headquartered in Rome working towards promoting conservation of all kind of cultural heritage in every region of the world. Further details can be accessed at www.iccrom.org.

Rohit Jigyasu is a conservation architect and risk management professional from India, currently working at ICCROM as Project Manager on Urban Heritage, Climate Change and Disaster Risk Management. Rohit served as UNESCO Chair holder professor at the Institute for Disaster Mitigation of Urban Cultural Heritage at Ritsumeikan University, Kyoto, Japan, where he was instrumental in developing and teaching International Training Course on Disaster Risk Management of Cultural Heritage. He was the elected President of ICOMOS-India from 2014-2018 and president of ICOMOS International Scientific Committee on Risk Preparedness (ICORP) from 2010-2019. Rohit has been the Elected Member of the Executive Committee of ICOMOS since 2011 and is currently serving as its Vice President for the period 2017-2020. Before joining ICCROM, Rohit has been working with several national and international organizations such as UNESCO, UNISDR, Getty Conservation Institute and World Bank for consultancy, research and training on Disaster Risk Management of Cultural Heritage.