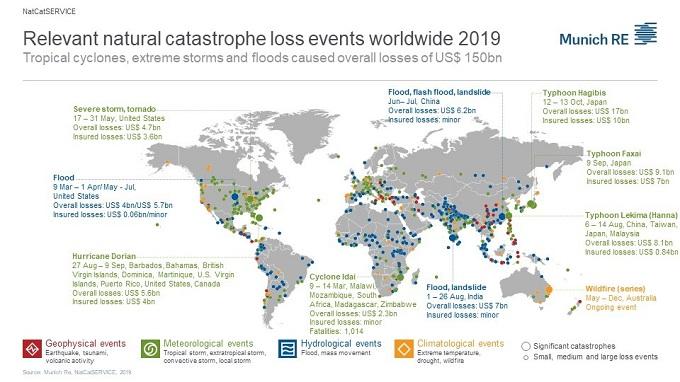 The 2019 natural catastrophe year at a glance

820 natural catastrophes caused overall losses of US$ 150bn, which is broadly in line with the inflation-adjusted average of the past 30 years. A smaller portion of losses was insured compared with 2018: about US$ 52bn. This was due, among other things, to the high share of flood losses, which are often not insured to the same extent as wind damage in most industrial countries.

The insured portion of overall losses, slightly above 35%, matches the average of the past ten years. This is evidence that large sections of the market remain uninsured, especially in emerging and developing countries.

"The severe cyclones in 2019 have highlighted the importance of knowledge about changes in risk. Natural climate variations influence weather catastrophes from year to year. Longer-term climate change effects can already be felt and seen. Buildings and infrastructure must be made more resistant in order to reverse the increasing trend in losses. This will enable insurance to be more effective and support the remaining financial losses,"  said Torsten Jeworrek, Member of the Board of Management.

As in 2018, Japan was again struck by very severe typhoons. Hagibis and Faxai were two equally severe tropical cyclones which hit the Tokyo area. While Faxai swept over Tokyo Bay with wind speeds of 170 km/h and made landfall in the city of Chiba, Hagibis struck further northwest, directly over the Yokohama-Tokyo conurbation.

A special feature of Hagibis was extreme precipitation, even away from the centre of the storm. In places, as much as 1,000 millimetres of rain fell within two days (that is about 1,000 litres per square metre). In many municipalities, this represented 40% of the usual annual rainfall. Levees on many rivers were breached. Countless buildings were seriously damaged, and many industrial operations were flooded.

This year’s typhoon season was again, as in 2018, subject to the “El Niño Modoki” effect, a particular phase of natural climate oscillation, which causes variations in water temperatures in the tropical Pacific Ocean. Under these conditions, typhoons steer more frequently towards Japan. All in all, the typhoon season in the northwest Pacific was close to the long-term average in terms of the number of storms.

Ernst Rauch, Chief Climate and Geoscientist at Munich Re, said: “The typhoon season shows that we must consider short-term natural climate variations as well as long-term trends due to climate change. In particular, cyclones are becoming more frequently associated with extreme precipitation, as with Hagibis in Japan in 2019 and Hurricane Harvey in 2017 in the US. Recognising these changes can form the basis for further preventive measures to reduce losses.”

Hurricane Dorian: Grazes the US, destruction in the Bahamas

The strongest hurricane of the Atlantic season, Dorian, caused catastrophic damage in the Bahamas. The category 5 hurricane hit the Abaco Islands in the north of the island state on 1 September with wind speeds of about 290 km/h. From there, the storm moved to the neighbouring island of Grand Bahama and stalled there for one and a half days while maintaining extreme wind speeds. Buildings, infrastructure, yachts and ships were completely destroyed in many areas.

Originally, it was feared that Dorian would also hit the southeast coast of the US, but a more northerly and easterly track largely spared the US mainland. Dorian caused overall losses of about US$ 5.6bn, with only a small portion of these losses affecting the US. Insured losses came to about US$ 4bn.

The number of three major hurricanes (category 3–5) in the Atlantic in 2019 was close to the long-term average (2.7). However, the number of named storms (18) significantly exceeded the average (12). Losses were relatively low, however, as the strongest storms remained over the ocean or missed the US mainland. Overall losses in the US during the 2019 hurricane season were US$ 3bn, of which US$ 2bn were insured.

Due to the lack of severe hurricanes, the US share of global natural catastrophe losses was lower than usual (31% of overall global losses compared with the long-term average of 35%). The US thunderstorm season brought slightly more tornadoes than the long-term average. A strong snowmelt followed by a series of thunderstorms in March and May triggered severe flooding in the Midwest and other areas along the Mississippi. Overall losses from these events were about US$ 24bn, with about US$ 14bn in insured losses.

After the record losses of previous years, the wildfire season in California was less severe. A wet winter ameliorated summer drought conditions as compared with recent summers. There were still many fires, but they burned a much smaller area than the five-year average. Several fires threatened cities and millions of people lost electricity for days, as power was shut down as a precaution. Overall losses were US$ 1.1bn, and about US$ 0.8bn were insured. Despite the lower losses in 2019, this does not change the sharply rising long-term trend for forest area burned and wildfire losses in the US.

The bushfire season in Australia has already been very severe. High temperatures and dry air, in combination with a great deal of flammable fuel due to a lack of precipitation during the cooler season, led to a very early start to the bushfire season in September in Queensland, and since affecting New South Wales, Victoria, South Australia, Western Australia and Tasmania. Extreme fires enveloped Sydney in smoke; schools and government offices were temporarily closed. The losses from the fires were substantial, although the flames did not reach Sydney itself. However, the bushfire season is expected to continue during the midsummer months of January and February.

Individual events cannot be directly attributed to climate change. Recent studies have shown, nonetheless, that in the long term the environmental conditions for bushfires have become more favourable – especially in the south and east of Australia.

The greatest humanitarian catastrophe of the year was Cyclone Idai, which hit Mozambique and neighbouring countries in March. More than 1,000 people died and hundreds of thousands lost everything they had. Idai struck the coastal port of Beira, Mozambique’s second-largest city (500,000 inhabitants). With wind speeds of approximately 170 km/h, the storm wrecked a huge number of mostly simple structures. In addition, the flood wave and heavy precipitation caused widespread flooding stretching into the flat hinterlands, destroying crops. Overall losses came to US$ 2.3bn. Almost nothing was insured. The losses in Mozambique correspond to about a tenth of its GDP – an enormous impact on a very poor country. Mozambique was hit by another cyclone, Kenneth, just a few weeks later.

These extreme consequences clearly show that, particularly in poor countries, human lives and hard-won economic growth must be better protected. UN organisations, the World Bank, companies (including Munich Re) and other institutions founded the Insurance Development Forum (IDF) in 2016, which supports insurance solutions for developing countries through the G7 “InsuResilience Global Partnership” initiative.

A combination of heatwaves and severe hailstorms were the greatest cause of losses in Europe. A long dry period led to crop losses in many countries. In the Munich area, a storm in June brought hailstones the size of golf balls, causing nearly €1bn (US$ 1bn) in losses, of which nearly three-quarters was insured. Even more extreme hail damage was caused on the Adriatic in July. Hailstones as large as oranges pelted cars and roofs. Many people were injured. Overall losses from the summer storms in Europe were US$ 2.5bn (€2.2bn), with insured losses of about US$ 0.9bn (€0.8bn).

Ernst Rauch commented: “Although hailstorms are localised, they can cause extreme damage and can even be life-threatening. Recent scientific studies have shown that we can expect hailstorms to increase in many regions as a consequence of climate change. It is also clear in this case: Measures such as better early-warning systems and more resistant building materials are important in order to mitigate against long-term increases in losses.”

USA: California's wildfire costs are just the tip of the iceberg