Share your thoughts, ideas, photos and links on the GPDRR13 Tumblr blog 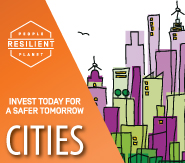 Many cities and local governments participating in the Campaign will be represented at the Fourth Session of the Global Platform for Disaster Risk Reduction.

The following links can be used as a quick guide to events for mayors, local government and Making Cities Resilient campaign partners. This includes a short summary and relevant links to plenary, featured and side events from 20-23 May.

“Meet the Mayors” of the Making Cities Resilient Campaign
From Hoboken, NJ, to Sendai, Japan, this interview series aims to provide a global snapshot of the many actions local governments are taking to reduce disaster risk and strengthen the resilience of their communities. Click on the links below to read these and other stories.