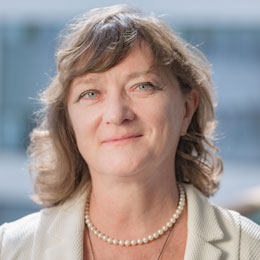 Dr. Olga V. Pilifosova is an expert in international climate change policy with a PhD in climatology from the Moscow Global Ecological Institute. Currently she is a Manager of the Adaptation Programme at the UNFCCC secretariat, where she leads cross-cutting work on adaptation, including, engaging stakeholders, supporting of the work of the Adaptation committee (the principal UNFCCC institution on adaptation), and the negotiations and implementation of the cross-cutting adaptation provisions of the Paris Agreement, including managing the team supporting the Technical Examination Process on Adaptation. Prior to this appointment, for 14 years she worked on progressively complex assignments at the UNFCCC secretariat, spearheading technical work and support for negotiations on a number of critical issues, including: the interface between international policy and science; impacts and vulnerability methods and tools; and scientific, technical and socio-economic aspects of adaptation. From 2010-2012 she worked at the Executive Direction and Management of the secretariat and served as a secretary to the Ad Hoc Working Group on Long-term Cooperative Action, providing overall coordination of the substantive support of the Bali Action Plan process that eventually lead to the Paris outcome in 2015. Before joining the secretariat, she worked at the Kazakh Institute for Climate and Ecology, leading the national climate change expert team. From 1999 - 2001 she served as the coordinating lead author for the adaptation chapter of the IPCC third assessment report. The report broke new ground by providing a comprehensive and systematic analysis of climate change adaptation, its typology and its linkages with sustainable development and equity.

In the global effort to build resilient societies, 2015 was a landmark year: the world witnessed the creation of three international frameworks—the Paris Agreement, the Sustainable Development Goals (SDGs), and the Sendai Framework for Disaster Risk Reduction—intended to steer the planet towards a secure and sustainable future. The international community was then faced with the challenge of understanding how best to move forward on implementing these three agendas.

On May 16-17, the UNFCCC Adaptation Committee took up this challenge and convened policymakers, civil society organizations, scientists, private sector representatives, and other stakeholders for the second annual technical expert meeting on adaptation (TEM-A). The 2017 TEM-A, held in Bonn, Germany, focused on the topic of integrating climate change adaptation under the Paris Agreement with the SDGs and the Sendai Framework. During the opening, UN Deputy Secretary General Amina Mohammed stressed that “the Paris Agreement, the 2030 Agenda, and the Sendai Framework are intrinsically linked,” adding that “action in one area benefits the others.”

Stakeholders present at the meeting agreed with Mohammed’s sentiment that the three agendas together form a natural and powerful alliance. Indeed, many participants shared concrete examples of programmes, policies, and other actions already in progress that link the three frameworks in practice.

In her remarks to the 2017 TEM-A, UNFCCC Executive Secretary Patricia Espinosa emphasized that “early action must be our priority” in order to “build resilience, reduce vulnerabilities, and accelerate implementation.” The concrete experiences and best practices shared throughout the sessions regarding integration of the three global agendas suggest that early action is indeed a priority for the international community, and it will continue to yield tangible improvements for countries and communities in the years leading up to 2030 and beyond.

Sione Fulivai, from the government of Tonga, described his country’s coordinated approach to development which merges adaptation and DRR throughout all levels of government.  The country is using the process to formulate and implement national adaptation plans (NAPs) and disaster risk principles to steer itself towards meeting the sustainable development goals. Community-level actions in the country are aligned with the national strategy, helping to ensure that the country as a whole can take advantage of the full potential offered by these three complementary international frameworks.

Fulivai noted that these coordination efforts were not limited to Tonga, but extended to the Pacific region more broadly, where “paradigm shifts and transformational change” have been underway in relation to the NAPs and Joint National Action Plans.

Espen Ronneberg, from the Secretariat of the Pacific Regional Environment Programme (SPREP)—a regional organization charged with coordinating environmental protection and sustainable development efforts in the Pacific—elaborated on the utility of integrating actions taken under the three agendas. He stressed the efficiency gains that have emerged, and are continuing to emerge, as a result of the region-wide merger of adaptation and DRR efforts. In particular, this approach has enabled developing countries in the Pacific to make better use of limited institutional capacity because of the considerable overlap between the expertise and datasets required to advance in either area.

Work is already underway in the region to establish an integrated database so that information collected and entered once can serve multiple purposes.

The experiences shared by Tonga and SPREP demonstrated the potential for integrative action to serve as a catalyst for sustained and tangible progress in small island developing states in the Pacific, which are especially vulnerable to the effects of climate change.

Throughout the TEM-A sessions, the importance of robust scientific assessments and high quality data was highlighted to achieve tangible progress on integrating and implementing the three agendas.

In recognition of the central role of reliable and relevant data, Akio Takemoto from the Government of Japan elaborated on the comprehensive climate change impact assessment process which Japan undertook prior to developing their NAP. The assessment, which gauged climate change impacts in 57 sectors across the country, identified sectors that are exposed to high risk as a result of climate change and was then used to inform the country’s adaptation plans.

Japan is currently working to extend its adaptation planning approach to the wider Asia Pacific region by developing a similar information platform—to be called AP-Plat—that will provide datasets and toolkits related to climate change impacts, as well as various capacity building resources, to developing countries in the region. The country expects that, once implemented, this platform and its associated resources will assist partnering countries build resilience through their NAPs, and make progress towards the SDG sand the DRR objectives outlined under the Sendai Framework.

Dedicated data-gathering efforts and tangible progress in integrating the three global frameworks is also underway across Africa. Benjamin S. Karmorh Jr. from the government of Liberia, explained that the country’s NAP is being used as a guiding mechanism for completing vulnerability assessments related to disaster risk and the SDGs.

In light of the country’s struggle with the Ebola epidemic, Liberia places special emphasis on the nexus between climate change, health, and disasters. The country has established a National Disaster Management Agency, which is working closely with the Environmental Protection Agency to address the vulnerabilities highlighted by the NAP and move Liberia closer to achieving the SDGs.

The TEM-A sessions made clear that concrete action from non-State actors is imperative in reaching the goal to integrate the three 2015 agendas.

For example, the Red Cross/Red Crescent Climate Center shared progress updates on the Partners for Resilience (PfR) alliance, which integrates climate change adaptation, ecosystem management, and disaster risk reduction in community-level projects in order to bolster resilience on the ground. Attendees heard about PfR’s work in the Philippines, which has involved facilitating a fruitful policy dialogue between contiguous local governments in order to implement a common flood management plan and early warning system. These efforts are helping to build resilience among vulnerable communities and support inclusive and sustainable development throughout the country.

All examples, lessons, challenges, and other insights shared by participants during the TEM-A will serve as the basis for a forthcoming technical paper, which will explore opportunities to enhance adaptation action and implementation prior to 2020.

Objective of the Technical Examination Process on Adaptation (TEP-A)

The Paris Agreement established the technical examination process on adaptation to promote enhanced action prior to 2020. The UNFCCC technical expert meetings (TEMs) on adaptation are at the core of this process. The TEP-A is taking place during 2016-2020 and its objective is to identify concrete opportunities for strengthening resilience, reducing vulnerabilities, and increasing the understanding and implementation of adaptation actions.

The four key functions of the TEP-A

The event is organised jointly by the Subsidiary Bodies, the Adaptation Committee and guided by the High Level Climate Champions. It comprises annual technical expert meetings, an annual technical paper and an annual summary for policymakers. The summary for policymakers feeds into the annual high‐level event that builds on the Lima‐Paris Action Agenda and will be held in conjunction with the COP until 2020.