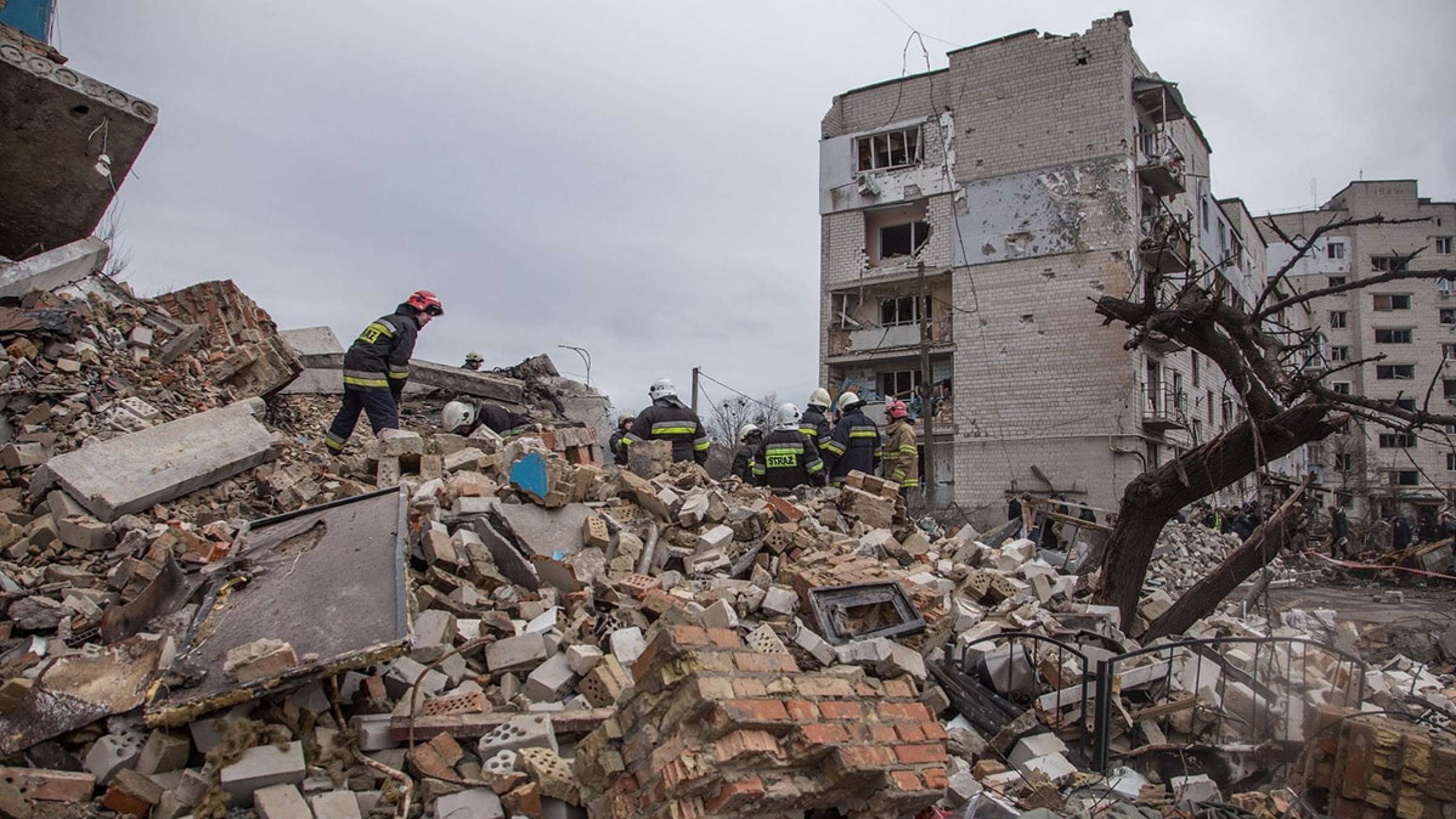 Any disaster has the potential to set in motion a series of cascading risks, with hazards triggering a chain of new risks – and war is certainly no different. The largely dormant risk posed by asbestos building materials, which are usually contained in standing structures, becomes a serious long-term hazard when bombs or earthquakes reduce buildings to rubble. This creates health risks long after the initial destruction. It is crucial for recovery and reconstruction plans to consider this long-term risk to avoid future public health disasters.

The war in Ukraine has wreaked havoc on urban areas, and has already caused over six million people to flee as Russian forces continue to bomb their neighbourhoods. We hope that the war will soon end, and that families will be able to return to their homes.

However, the war also will have cascading, long-term impacts, including a secondary environmental disaster caused by uncontrolled asbestos. This will undoubtedly present significant long term health risks for residents and also for those who may come to assist in reconstruction efforts.

One issue of serious concern is the problem of unprecedented asbestos contamination, at a scale that the world is ill-equipped to deal with.

Until recently, Ukraine has been a major consumer of Russian asbestos, which is found throughout its built environment.

While asbestos is relatively safe while it remains encapsulated in glue or cement, the mass destruction of buildings in Ukraine is creating millions of tons of highly hazardous, asbestos-contaminated rubble. This is a long-term health hazard.

The World Health Organization lists asbestos as a serious carcinogen, causing a range of diseases from breathing difficulties to cancers of the lungs, stomach, ovaries and other organs.

Asbestos is the common name for a group of half a dozen naturally occurring silicon-based minerals. Although asbestos types vary, they all share the unique characteristic of long fibre-like crystals that are easily broken apart, yet retain high tensile strength and readily trap air. Asbestos is easy to mine and process, and is readily available: these characteristics made it seem like the perfect material for reinforcement and insulation.

However, when these fibres release into the environment (via air or water) during mining, manufacture, construction, or demolition, they pose a significant health hazard.

A major producer and consumer

During its time under the Soviet Union, Ukraine itself was a major producer of asbestos, and used high volumes of asbestos-containing materials in construction. Although policy makers were increasingly aware of the risks, the complex geopolitics between Russia and Ukraine made it extremely difficult for Ukraine to ban the import, sale or use of asbestos. In fact, in 2011 the government of Ukraine sided with Russia to block the inclusion of chrysotile asbestos in the Rotterdam Convention, an international agreement on the trade of hazardous chemicals.

Ukraine’s high usage of asbestos continued until very recently, with more than 183,000 tons used in 2005 alone . It was only in 2012,t an international asbestos conference held in Kyiv, that parties discussed the phase-out of asbestos production and use; and in 2017 Ukraine finally banned asbestos.

A recent source in Ukraine suggests that up to 60% of roofs used asbestos-reinforced slate. While there aren’t clear records of the exact type, volume and distribution, there is no doubt that asbestos contamination is prevalent throughout the rubble. Unless urgent steps are taken, safely managing this mass contamination is almost certain to impede and endanger post-war recovery.

Many construction experts are familiar with difficulties in renovating buildings that are old or damaged, and many have experienced the expensive and time-consuming safeguards required to prevent deadly asbestos fibres from being released into the air, so as to protect construction workers and residents.

Sadly, this underlying awareness is often brushed aside in the aftermath of disasters, as the rush to provide recovery and reconstruction overshadows long-term health hazards

In reality, experiences of disasters such as the collapse of the World Trade Center in 2001, the Sichuan earthquake in China in 2008, and more recently the Lombok earthquake  in Indonesia in 2018, remind us that cascading impacts, often with slow onset and long duration, can ultimately incur much larger losses of life and injury than the initial shock event.

In 2018 Lombok saw hundreds of thousands of homes destroyed and damaged as the result of a cluster of earthquakes across hundreds of kilometres in northern Lombok, Indonesia, and neighbouring islands. Government construction statistics showed that between 20 and 30% of the houses used asbestos-reinforced roofing. In the rush to respond, remnant buildings were levelled to provide space for emergency shelter and housing, leaving hundreds of thousands of people living amongst millions of tons of asbestos-contaminated rubble.

These disasters highlight the inadequacy of post-disaster asbestos remediation guidelines. Although a range of guidelines exist, most are built upon a zero-tolerance policy suitable for small-scale and isolated buildings. These guidelines are inapplicable when dealing with millions of tons of contamination across hundreds of kilometres in emergency settings.

As we begin to think about recovery and reconstruction in Ukraine, it is critical to take long term environmental safeguards into account. Even if financial restrictions mean we can’t always “build back better”, we should at least “build back safer.” Secondary hazards that result from the war – such as asbestos contamination – need to be fully assessed and appropriate plans and procedures put in place to ensure they are dealt with adequately and carefully.

As reconstruction professionals, we have a commitment to the “do no harm” principle, which not only means ensuring families return home to safe environments, but also fulfilling our legal obligation to protect the health of workers and volunteers participating in reconstruction efforts.

Regardless of competing and urgent recovery needs, strategic planning around asbestos hazard management must begin today to ensure a better, safer recovery for Ukraine and its people.

Olivia Nielsen is an Associate Principal at Miyamoto International where she focuses on resilient and sustainable urban solutions. From Haiti to Papua New Guinea, she has developed and worked on critical urban programs in over 30 countries. Through her work she hopes to build green and resilient cities for all!

Dave Hodgkin is the Asia Pacific Director at Miyamoto International. He is a renowned leader in humanitarian response and development projects, which have included work in disaster preparedness, capacity strengthening and policy development, risk reduction and mitigation. He has led numerous humanitarian assistance efforts on response, recovery, and reconstruction following disasters. He is a leading Shelter and Settlements specialist with a lifelong commitment to the interaction between communities, their housing, and the environment.

Share this
Related information
Related links
Women and the right to resilient housing
Ukraine: disease control is a casualty of war – so a surge in COVID cases is likely
Siberia’s wildfires could worsen as Russia focuses on Ukraine
Ukraine to join UNECE Convention on the Transboundary Effects of Industrial Accidents
Bridge the Gap: Environmental and industrial Risks in eastern Ukraine
Keywords
Themes
Disaster Risk Management
Fragility and conflict
Country & Region
Ukraine
Syndication
Highlights