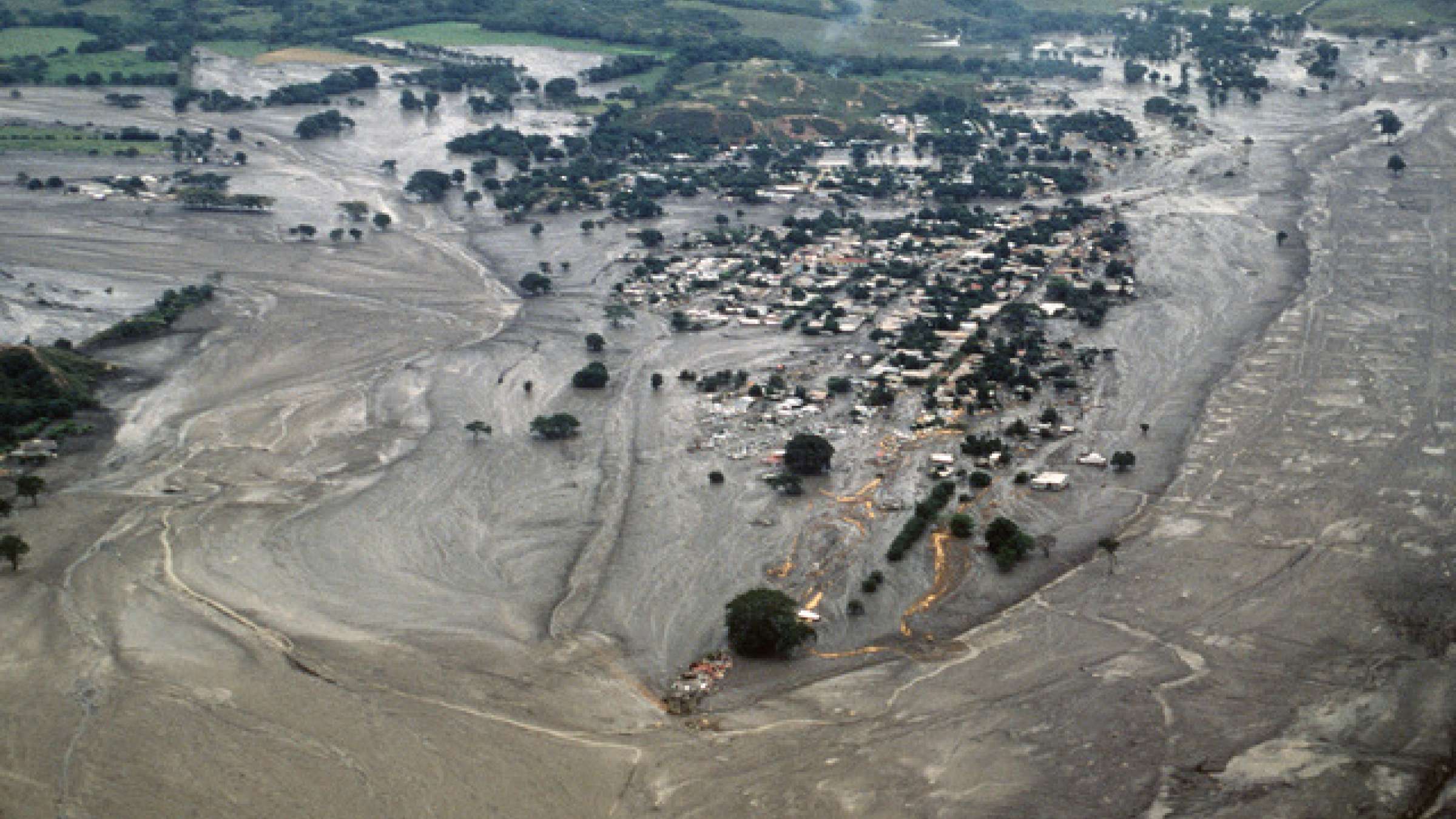 The Nevado del Ruiz Volcanic Eruption, also known as the Armero Tragedy (Spanish: Tragedia de Armero), is considered as Colombia’s worst natural hazard-induced disaster which produced the deadliest lahar ever recorded. After 69 years of dormancy, the stratovolcano in Tolima, Colombia erupted in 13 November 1985 melting the mountain’s glaciers and sending lahars down its slopes at 60 kilometers per hour.

Despite warnings from geologists and other experts to authorities and the media weeks and days prior to the eruption, the consequences of the eruption were catastrophic because populations in nearby towns were caught largely unaware and evacuation orders were not carried out in time. Based on the initial assessment of the Colombian government in December 1985, losses were estimated at 34.94 billion pesos (US $218 million). The disaster affected over 200,000 people and left about 24,000 dead and 10,000 homeless. Other damage and losses included approximately 50 educational facilities; two hospitals; over 4,000 housing units; employment income in the affected areas; infrastructure such as roads and railroad tracks, bridges, water and sewer systems, transmission lines, and fuel pipelines; and 6,000 acres of farmland and agricultural infrastructure as well as livestock (National Research Council, 1991).

A presidential task force was put together and an organization called Resurgir (English: “to rise again”) was established to coordinate the recovery program conceived as a joint effort between the public and private sectors. In the immediate, housing, food, employment, urban development and verification of the identities of survivors were prioritized while community redevelopment and psychosocial issues were the major considerations in the longer term.

The Nevado del Ruiz volcanic eruption was instrumental in influencing major institutional and legislative changes not only in Colombia but also in the Latin America and the Caribbean region. Between 1985 to the mid-1990s, national disaster agencies in the region made amendments to their disaster risk management frameworks to focus on and prioritize disaster risk prevention, mitigation and preparedness especially risk assessment and early warning systems. In Colombia, in particular, an ambitious reform of disaster risk management through the creation of the National System for Disaster Prevention and Response, which adopted disaster risk reduction as a policy goal, was undertaken in 1989. This reflected a paradigm shift from response to risk reduction through the integration of risk considerations and disaster risk management strategies in development planning. A systems-based risk governance was also introduced to ensure a whole-of-government approach and the active participation of scientific and technical institutions, the Red Cross and civil society.

KNOWLEDGE BASE
No results found!