The Center for American Progress is dedicated to improving the lives of Americans through progressive ideas and action.

Center for American Progress LogoBuilding on the achievements of progressive pioneers such as Teddy Roosevelt and Martin Luther King, its work addresses 21st-century challenges such as energy, national security, economic growth and opportunity, immigration, education, and health care.

it develops new policy ideas, critique the policy that stems from conservative values, and challenge the media to cover the issues that truly matter and shape the national debate.

Founded in 2003 to provide long-term leadership and support to the progressive movement, CAP is headed by John D. Podesta and based in Washington, D.C. CAP opened a Los Angeles office in 2007. 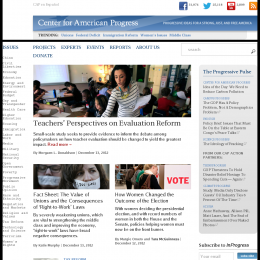