Members of the alliance work together for positive and sustainable change in the lives of people affected by poverty and injustice through coordinated and effective humanitarian, development and advocacy work. We work with and for people of all faiths and none. In brief ACT Alliance is composed of...

Members of the alliance work together for positive and sustainable change in the lives of people affected by poverty and injustice through coordinated and effective humanitarian, development and advocacy work. We work with and for people of all faiths and none.

The ACT Alliance works towards a world community where all God’s creation lives with dignity, justice, peace and full respect for human rights and the environment.

The ACT Alliance strategic plan (2011 - 2014) has six objectives. One of the objectives for "efficient and effective emergency response" strongly encourages disaster risk reduction "to save lives and protect livelihoods by responding efficiently and effectively to emergencies through an integrated risk reduction, preparedness and recovery approach".

ACT Alliance has advisory and community of practice groups working on cross-cutting issues. One such advisory group works on climate change, adaptation and DRR. As there is a connection between DRR and impacts of climate change it is hoped that more synergy can be established there. One of the objectives of the Climate Change advisory group is: "to minimize the negative impact of climate change on poor and vulnerable people by creating adequate framework conditions at national, regional and international levels for disaster risk reduction, adaptation and resettlement (where necessary), based on a fair burden sharing, ie. financially supported by the developed world in accordance with the historic responsiblity and fiancial capacity of states as well as with its respective human rights obligations".

* The Inter-Agency Standing Committee (IASC) - ACT Alliance does not have a seat in the IASC, but is represented through ICVA and SCHR.

ACT Alliance has six advisory groups comprising representatives (10) from its members from different parts of the world. One of the advisory groups is on Humanitarian Policy and Practice. This group has come up with a post-HFA paper with the purpose of briefing all the members of the progress on the post-HFA process and encourage them to take part in the various events taking place in this regard.

ACT Alliance has developed an Emergency Preparedness and Response Plan (EPRP) template. Each of the ACT national forums (comprising all ACT members in a given country), are expected to complete this template as part of the forum level preparedness. The template includes mapping of all risks and hazards in the country and also the existing early warning mechanisms. Based on that, a proper preparedness plan, including dissemination of early warning, is laid out.

DRR is the cross-cutting and essential component in all the humanitarian appeals issued by ACT. Therefore, through each humanitarian response, ACT attempts to reduce underlying risk factors. Advocacy is also strongly focused on risk reduction.

EPRP is one of the key instruments to prepare ACT secretariat and members for an effective response. ACT has a well-defined emergency response mechanism, with stipulated timelines to trigger a response.

ACT is presently coming up with an e-portal which will enable its members to initiate discussions and planning within six hours of a disaster occuring. 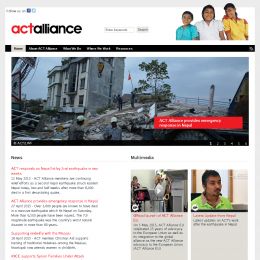