Established by the Secretary-General in 1997 as an instrument for UN reform, the UNDG designs system-wide guidance to coordinate, harmonize and align UN development activities. The group strengthens the UN development system at the country level, prepares it to meet future challenges and ensures that operations are conducted in accordance with mandates from UN governing bodies such as the General Assembly.

By strengthening the UN Resident Coordinator System and helping UN organizations work together in new and better ways, the UNDG generates synergies and efficiencies that increase the impact of UN programmes and policy advice. Coordinating development operations promotes more strategic support for national plans and priorities, makes operations more efficient and reduces transaction costs for governments. This helps the UN to be a more relevant and reliable partner for governments.

The UNDG is one of the three pillars of the UN Chief Executives Board (CEB), which furthers coordination and cooperation on a wide range of substantive and management issues facing UN System organizations. The CEB brings the executive heads of UN organizations together on a regular basis under the chairmanship of the Secretary-General. Within the CEB structure, the High-Level Committee on Management works on system-wide administrative and management issues, the High-Level Committee on Programmes considers global policy issues, while the United Nations Development Group deals with operational activities for development with a focus on country-level work.

The Administrator of the UN Development Programme (UNDP) chairs the UNDG. The UNDG Chair reports to the Secretary-General and the CEB on progress in implementing the group’s work plan, and on the management of the Resident Coordinator System.

The UN Development Operations Coordination Office (DOCO) (formerly the Development Group Office) is the technical support unit for the UNDG. DOCO provides the link between UNDG discussions at headquarters and the work of the UN development system at the country level, and helps the group prepare system-wide agreements, policies and guidelines for country offices.

Much of DOCO’s work focuses on supporting and strengthening the Resident Coordinator System with funding, policy guidance and training. DOCO advises RCs on how to make country programmes more efficient, effective and aligned with national priorities, and work to streamline coordination mechanisms.

The Common Country Assessment (CCA) is a common instrument of the United Nations system to analyse the national development situation and identify key development issues with a focus on the Millennium Declaration / MDGs, and other internationally agreed treaty obligations and development goals. One of the fi ve expected results from the UN Country Team’s (UNCT) analytical contribution to country analysis is the recognition of the risks of crises and disasters, as well as capacities for crisis prevention and disaster preparedness.

A key function of the CCA is to support and strengthen the national development framework which may include planning mechanisms such as: a Poverty Reduction Strategy Paper (PRSP), sector programmes, or a joint assistance strategy (JAS), and may also involve direct budget support. The CCA may also assist in a Consolidated Appeal Process (CAP) or a transition strategy, where they are developed. One of the results of the CCA process is a contribution to developing measures and building capacity for crisis prevention and disaster preparedness; and where applicable to mitigation plans, post-confl ict/disaster recovery and rehabilitation, and planning the transition from relief to development.

The UNDG Working Group on Programming Issues endorsed a Guidance Note on Integrating Disaster Risk Reduction into the Common Country Assessment and United Nations Development Assistance Framework in November 2008. The guidance note was revised and updated by a joint UNDG/ISDR Task Team on Mainstreaming of Disaster Risk Reduction over the course of 2008. The guidance note was approved by the UNDG in January 2009 after which it is being made available to UNCTs and relevant parties. 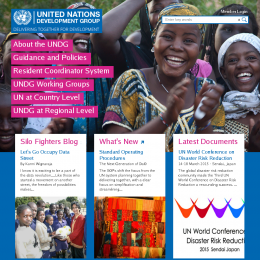