ECOSOC was established under the United Nations Charter as the principal organ to coordinate economic, social, and related work of the 14 UN specialized agencies, functional commissions and five regional commissions. The Council also receives reports from 11 UN funds and programmes. ECOSOC serves as...

ECOSOC was established under the United Nations Charter as the principal organ to coordinate economic, social, and related work of the 14 UN specialized agencies, functional commissions and five regional commissions. The Council also receives reports from 11 UN funds and programmes.

ECOSOC serves as the central forum for discussing international economic and social issues, and for formulating policy recommendations addressed to Member States and the United Nations system.

It is responsible for:

ECOSOC Resolution E/2001/35 on ISDR reiterated the resolution 1999/63 of 30 July 1999 entitled “International Decade for Natural Disaster Reduction: successor arrangements”, and recognized the ISDR as the international platform for disaster reduction issues, and urged the international community to provide the necessary resources to the ISDR to promote the dissemination of the disaster reduction message in view of a successful implementation of the ISDR. It invited the General Assembly to give full consideration to the report of the Secretary General at its fi fty sixth session, under the item entitled “Environment and sustainable development”.

The Commission on the Status of Women (CWS) is a functional commission of ECOSOC dedicated exclusively to gender equality and advancement of women. It is the principal global policy-making body established by ECOSOC resolution 11(II) in 1946. Every year, representatives of Member States gather at United Nations Headquarters in New York to evaluate progress on gender equality, identify challenges, set global standards and formulate concrete policies to promote gender equality and advancement of women worldwide.

CWS addressed environmental management and the mitigation of disasters caused by natural hazards at its 46th session in 2002. In its fifty-second session in March 2008, it considered “Gender perspectives on climate change” as the emerging issue.

The Commission is responsible for reviewing progress in the implementation of Agenda 21 and the Rio Declaration on Environment and Development; as well as providing policy guidance to follow up the Johannesburg Plan of Implementation (JPOI) at the local, national, regional and international levels. The JPOI reaffi rmed that the CSD is the high-level forum for sustainable development within the United Nations system.

The CSD meets annually in New York, in two-year cycles, with each cycle focusing on clusters of specific thematic and cross-sectoral issues, outlined in its multi-year programme of work (2003-2017) (E/CN.17/2003/6).

The Johannesburg Plan of Implementation adopted at the World Summit on Sustainable Development (Johannesburg, 2002) includes commitments related to disaster and vulnerability reduction under chapter IV: Protecting and managing the natural resource base of economic and social development.

The 11th Session of the Commission on Sustainable Development (2003) adopted the themes of disaster management and vulnerability to be reviewed in its fifth cycle (2014-2015) in the CSD’s multi-year programme of work. Risk management and vulnerability have also been examined in the context of other thematic clusters of CSD, such as water, sanitation and human settlements (2004-2005) and drought and desertification (2008-2009). Poverty eradication, protecting and managing the natural resource base, sustainable development of SIDS and sustainable development for Africa, in particular land, drought and desertification related issues, are very relevant to the implementation of the Hyogo Framework for Action.

UNDRR participates into the CSD and usually organizes one side event together with its partners during the CSD session.

United Nations Forum on Forests (UNFF) was established in October 2000, by ECOSOC resolution 2000/35 as a subsidiary body with the main objective to promote “… the management, conservation and sustainable development of all types of forests and to strengthen long-term political commitment to this end…” based on the Rio Declaration, the Forest Principles, Chapter 11 of Agenda 21 and the outcome of the IPF/IFF Processes and other key milestones of international forest policy.

The outcome of the sixth session of the United Nations Forum on Forests (E/2006/INF/2/Add.1) expressed its concern about continued deforestation and forest degradation and its adverse impact on the livelihoods of over a billion people (including many of the poorest and most vulnerable), and about the need for more effective implementation of actions to facilitate the management, conservation and sustainable development of all types of
forests.

ECOSOC Expert bodies, such as the Permanent Forum on Indigenous Issues discusses issues relevant to the implementation of the Hyogo Framework for Action. 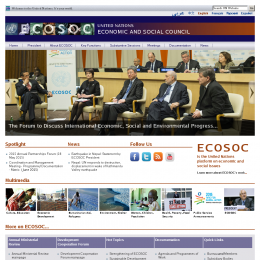