Asian Disaster Preparedness Center (ADPC) is an intergovernmental organization that works to build the resilience of people and institutions to disasters and climate change impacts in Asia and the Pacific. Established in 1986, it provides comprehensive technical services to countries in the region across...

Asian Disaster Preparedness Center (ADPC) is an intergovernmental organization that works to build the resilience of people and institutions to disasters and climate change impacts in Asia and the Pacific. Established in 1986, it provides comprehensive technical services to countries in the region across social and physical sciences to support sustainable solutions for risk reduction and climate resilience. ADPC supports countries and communities in Asia and the Pacific in building their DRR systems, institutional mechanisms and capacities to become resilient to numerous hazards, such as floods, landslides, earthquake, cyclones, droughts, etc. ADPC is governed by its nine founding member countries: Bangladesh, Cambodia, China, India, Nepal, Pakistan, the Philippines, Sri Lanka, and Thailand.

- Support countries in Asia and the Pacific to mainstream DRR and CR in development;
- Support communities and countries in Asia and the Pacific to establish systems and capacities that reduce disaster and climate risk impacts;
- Serve as a pro-active and responsive regional resource center for DRR and CR;
- Promote and share DRR and CR knowledge and experience as a strong partner and networker;
- Serve as an incubator for innovation to address challenging and emerging issues in DRR and CR.

Working across a broad range of specialist areas, ADPC develops and implements cross-sectoral projects/programs on the strategic themes of risk governance, urban resilience, climate resilience, health risk management, preparedness for response and resilient recovery. Our strategic themes are complemented and underpinned by the cross-cutting themes of gender and diversity, regional and transboundary cooperation as well as poverty and livelihoods.

Through its work, ADPC supports the implementation of the Sendai Framework for Disaster Risk Reduction 2015–2030, the Sustainable Development Goals (SDGs), the New Urban Agenda, the United Nations Framework Convention on Climate Change, the agenda defined at the World Humanitarian Summit in 2016, and other relevant international frameworks. Through its focus on poverty & livelihoods and gender & diversity, ADPC’s approach champions the use of sex, age, disability disaggregated data to promote a rights-based, inclusive and gender equal approach in DRR. ADPC puts a special emphasis on equality impacts of ADPC’s initiatives to ensure there is a fair distribution of benefits and that inherent or new risks to vulnerable populations are not increased.

In view of the trans-boundary nature of disasters and the importance of regional cooperation for enhanced management of disaster and climate risks, 26 countries of Asia and the Pacific established the Regional Consultative Committee on Disaster Management (RCC) in 2000. Since then, ADPC has been supporting the RCC as its secretariat. It is a unique forum that brings NDMOs of member courtiers together every year and focuses on the implementation of disaster and climate risk management initiatives. RCC facilitates the implementation of the global and regional frameworks for DRR at the national and regional level.

Over three decades, ADPC has grown and diversified its expertise across social and physical sciences to support sustainable solutions for risk reduction and risk management across a broad range of specialist areas. The Bangkok headquarters and country offices in Myanmar, Bangladesh, and Sri Lanka host experts in risk assessment and decision-support systems; state-of-the-art climate and geospatial science; policy and planning; health; community resilience; social science and the private sector. ADPC’s technical experts work towards inclusive development goals across its thematic areas. The ADPC Academy designs and delivers specialist capacity-building and training courses at all levels, as well as enhancing the capabilities of national training centers.

National and Local Governments in Asia and the Pacific region

The Urban Resilience department of ADPC assists cities and urban communities in Asia and the Pacific in managing and mitigating urban disaster risks. It works towards enabling people, institutions, businesses, and systems in urban areas to have a greater capacity to prepare, respond, adapt, and thrive despite stresses and shocks.ADPC has contributed to the launch of the campaign in Thailand and other countries in Asia. At the New Delhi Mayors’ meeting in June 2010, ADPC promoted the signature for the campaign of more than 100 Mayors. ADPC has nominated the current governor of Bangkok Mr Mom Rajawongse Sukhumbhand a Champion for the “Making Cities Resilient” campaign representing all previous governors who have contributed in making Bangkok a better place for urban communities. 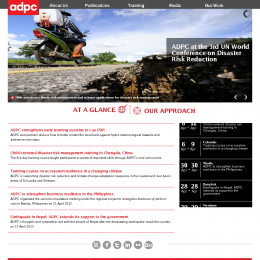