Detecting Earth’s natural hazards high up in the sky 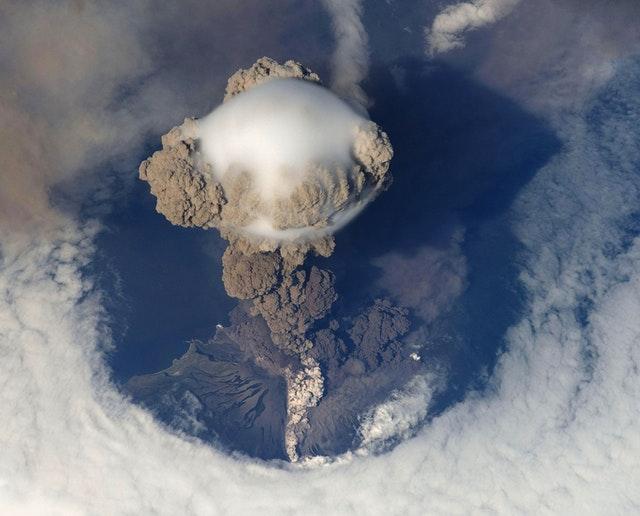 Earthquakes, volcanic eruptions, tsunamis, explosions, and other events on Earth’s surface generate waves that travel upwards through the atmosphere. A recent article in Reviews of Geophysics explores how these events are detected by different instruments and the prospects of using these to monitor natural hazards in real time. Here, the author gives an overview of atmospheric waves generated by natural hazards and what we can learn from them.

How do waves generated at Earth’s surface propagate upwards?

Gravity waves are lower frequency waves. The impact of gravity means that these waves cannot propagate upward vertically but rather obliquely. The vertical component of their velocity is low, so they reach the ionospheric altitudes 45 to 60 minutes after they are generated on Earth’s surface.

The propagation and evolution of the acoustic and gravity waves in the atmosphere is greatly affected by the propagation medium and its properties. The exponential decrease of atmospheric density with altitude leads to the growth of both acoustic and gravity waves upon their upward propagation. Consequently, small waves generated at the Earth’s surface may provoke significant perturbations in the upper atmosphere and ionosphere.

What instruments can be used to detect these waves in the ionosphere?

The first co-seismic ionospheric disturbances were detected by ionosondes and Doppler sounders after the great 1964 Alaskan earthquake. More recently, the Global Navigation Satellite Systems (GNSS), such as the American GPS, Russian Glonass, European Galileo, Chinese BeiDou, etc., have become the principal instruments used for the detection of ionospheric perturbations generated by natural hazards. Earthquake and tsunami-driven atmospheric and ionospheric disturbances have also been detected in-situ by low-earth-orbit satellites, such as GOCE, GRACE, SABER, and COSMIC/Formosat.

What can observations in the ionosphere tell us about the original source and location on Earth?

Once disturbances are detected in the ionosphere their spatio-temporal characteristics (such as, arrival time, amplitude, propagation speed, etc) can be estimated. From these parameters, it is possible to determine the source of natural hazards. In some cases, we can also obtain the information about the source parameters from the ionospheric disturbances, such as the dimensions of a seismic fault ruptured in an earthquake, the height of a tsunami wave, or the energy of a volcanic eruption.

Could ionospheric detection help the monitoring of natural hazards in real time?

The fact that co-seismic ionospheric disturbance can be detected in the ionosphere only 7 to 9 minutes after an event opens the possibility of using ionospheric measurements for near real-time tsunami warning systems.

For instance, seismo-ionospheric imagery using GNSS data with high temporal and spatial resolution could potentially provide estimates of an earthquake’s magnitude, and the seismic source extent.

Or, ionospheric measurements by dual-frequency GNSS receivers installed on islands and coasts may one day enable estimation of the height of tsunami waves (up to 500 kilometers away from the coasts). In addition, future satellite missions with on‐board airglow cameras will help to track in real-time the propagation of tsunamis over the entire oceans before they hit coastlines.

What are some of the unresolved questions where additional research, data or modeling is needed?

However, many features of the coupling between the solid Earth, ocean, atmosphere, and ionosphere remain poorly understood. For instance, it is known that giant earthquakes can generate shock waves, but what about smaller earthquakes? How do variations in the neutral atmosphere affect the propagation of acoustic and gravity waves from the surface to the ionosphere?

In terms of observations, further developments of ground-based networks of dual-frequency GNSS-receivers are necessary. This would enhance spatial coverage and make it possible to analyse ionospheric disturbances in greater detail. In addition to ground-based instruments, future atmospheric and ionospheric satellite missions will also help to provide insights.

In terms of modeling, more sophisticated 3D tools would fill gaps in our knowledge by fully reproducing atmospheric and ionospheric disturbances generated by natural hazards. Accurate modeling tools are also needed for studying the seismic and volcanic activities of other planets. As we know from Earth, a planet’s interior can be understood by analysing seismic wave propagation as recorded by a seismometer, but installation of seismometers on the surface of other planets is quite a challenge and, so far, only Mars has got one thanks to NASA’s Insight mission. Moreover, atmospheric conditions at the surface may not be favourable for installation of any equipment. For instance, Venus has very high atmospheric temperature and pressure, making it impossible to place a seismometer for an extended period of time. Therefore, for Venus, the remote monitoring of atmospheric perturbations is the only way to detect signs of seismic/volcanic activity and to learn about its formation and evolution.