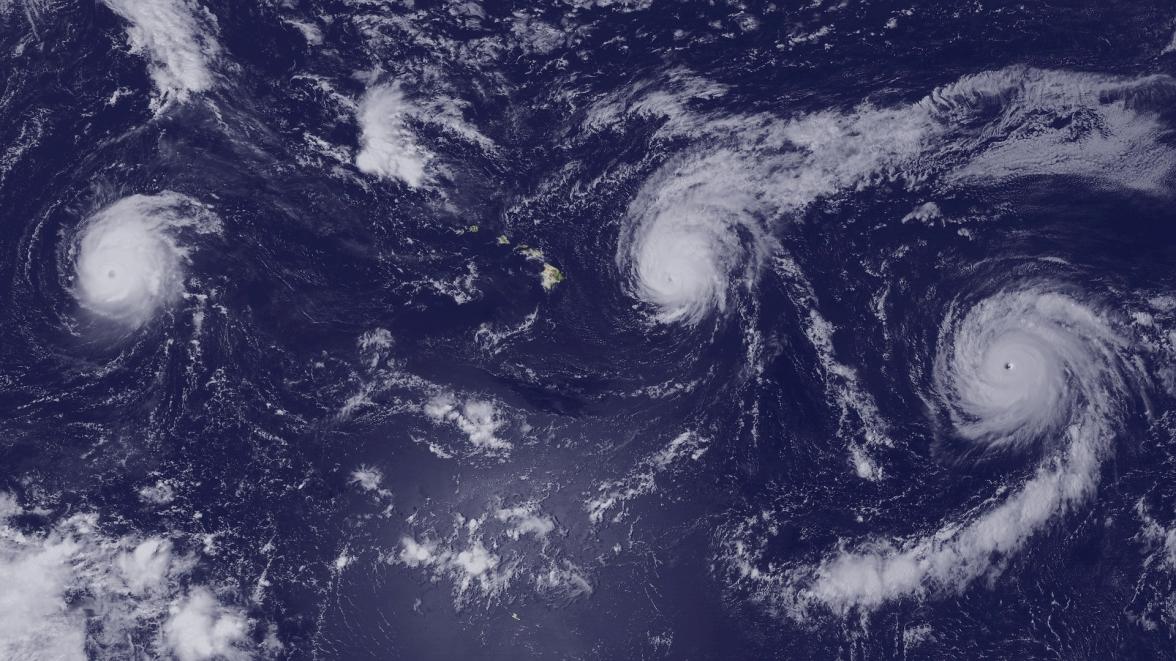 Tropical cyclones across the world have become more intense over the past four decades, a new study concludes.

Major tropical cyclones with winds of 115 miles per hour or more became 15% more likely at a global level from 1979-2017, according to the analysis.

The region seeing the most significant increases in cyclone intensity was the North Atlantic. Over the study period, the chances of a major hurricane occurring in the North Atlantic increased by 49% per decade, the research finds.

The southern Indian Ocean also saw large increases in cyclone intensity, the research finds. This is particularly notable because cyclones that originate in this region often strike in parts of coastal Africa that have limited natural hazard defences, a scientist tells Carbon Brief.

The results “should serve to increase confidence in projections of increased tropical cyclone intensity under continued warming”, the study authors say.

Tropical cyclones are storms that develop in tropical waters at least 5-30 latitude north or south of the equator, where sea temperatures are at least 27C. Strong tropical storms are called “hurricanes” in the North Atlantic and the central and North Pacific, “typhoons” in the northwest Pacific and simply “tropical cyclones” in the South Pacific and Indian Ocean.

However, it is not easy to see a clear increase in intensity just by looking at the global tropical cyclone record, explains study lead author Dr James Kossin, an atmospheric research scientist at the National Oceanic and Atmospheric Administration (NOAA). He tells Carbon Brief:

“The historical tropical cyclone record is created in a real-time operational setting, typically by forecasters while a storm is active. The forecasters always use the very best data that they can get to estimate storm intensity. The problem is that the data have become progressively better over time. New instruments, data, and intensity estimation techniques are frequently introduced or updated and this creates an artificial trend.”

Instead, for the new research, published in the Proceedings of the National Academy of Sciences, Kossin and his colleagues made use of algorithms that can estimate tropical cyclone intensity from satellite data alone. Kossin explains:

“This removes a lot of the technology-based trends, but leaves the actual physical trends alone.”

The research finds that, from 1979-2017, the chances of a major tropical cyclone occurring increased by 15%. Tropical cyclones are considered “major” once their winds reach 100 knots – around 115 miles per hour – or more. This is equivalent to category 3 or higher on the Saffir-Simpson Hurricane Wind Scale.

“Our analysis finds that the global increasing trend in tropical cyclone intensity has now risen to a point where it is very unlikely to be random, even after addressing known issues with the historical data.”

The chart shows how, from the early to the late part of the study period, the chances of a tropical storm exceeding 100 knots increases from 0.27 to 0.31, which represents about a 15% increase.

The authors also studied how the proportion of major tropical cyclones changed in different regions, including in the North Atlantic, the eastern and the western North Pacific, the southern Pacific and the northern and southern Indian Ocean.

The charts indicate that the region seeing the most significant increases in cyclone intensity over the past 40 years is the North Atlantic, which is the breeding ground for hurricanes affecting North America and the Caribbean.

In the North Atlantic region, the chances of a major hurricane occurring increased by 49% per decade over the study period, according to the research.

Research released earlier this month found that the number of hurricanes originating in the North Atlantic has also increased slightly since the 1980s. However, this study found that the increases were more closely related to decreases in air pollution than climate change. Kossin says:

“In the Atlantic, many of the factors that have been affecting hurricane frequency are the same as the factors that have been affecting hurricane intensity. How much of the warming is due to the decreasing concentrations of pollutants since the Clean Air Act and amendments of the 1970s, and the increasing concentration of greenhouse gases is still a matter of active debate. But most agree that there is a human fingerprint on the changes we’ve observed.”

The regional analysis also reveals that intensity increases have been particularly marked in the southern Indian Ocean. In this region, the chances of a major tropical cyclone occurring increased by 18% per decade over the study period, the study says.

This is notable because cyclones that originate in this region tend to affect parts of coastal Africa that have limited natural hazard defences, explains Dr Shuai Wang, an atmospheric physicist from Imperial College London, who was not involved in the study. He tells Carbon Brief:

“A similar tropical storm may bring more risk to the south-west Indian Ocean coast than some other cyclone-prone coastal regions in the world due to the local high vulnerability and relatively low capability to cope with natural hazards.”

The 2018-19 south-west Indian Ocean was the costliest cyclone season on record.

One of the season’s cyclones – Cyclone Idai – affected two million people across Mozambique, Malawi and Zimbabwe in March 2019. It has been described by the United Nations as the worst disaster to ever hit the southern hemisphere.

In contrast, the proportion of major cyclones in the northern Indian Ocean has fluctuated from one decade to the next, showing an overall decline. However, this trend is not statistically significant, the author say in their research paper:

“The northern Indian Ocean exhibits a decreasing trend, but it is highly insignificant and based on a small sample of data.”

Bangladesh and the east coast of India are currently bracing for a severe cyclone known as Cyclone Amphan, which is due to make landfall on Wednesday (20 May). The cyclone is moving inland from the Bay of Bengal in the northern Indian Ocean.

Overall, the findings reinforce the scale of the impact that climate change is having on the world’s populations, says Kossin:

“This is just one of the many reasons for considering humans’ role in how our planet is changing.”

Study: Climate change has been influencing where tropical cyclones rage