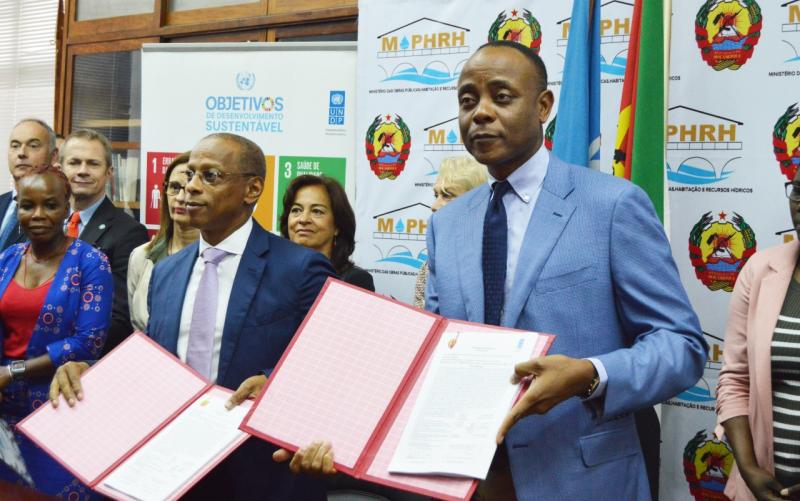 Maputo – The United Nations Development Programme (UNDP) and the Government of Mozambique today formally signed an agreement for UNDP Recovery Facility that will help fast track recovery and build resilience following the devastation unleashed by Cyclones Idai and Kenneth. The main pillars of this innovative programme are: (1) Livelihoods and Women Economic Empowerment; (2) Housing and Community Infrastructure; and (3) Institutional Strengthening of the Reconstruction Cabinet.

The programme is an agile mechanism to implement short-to-long term recovery activities that will contribute to addressing the root causes of vulnerability and build resilience to future disasters. It will pay particular attention to women and vulnerable groups. This initiative can have a transformational impact on Mozambique given its high vulnerability to climate change. Indeed, Mozambique is regarded as one of the most at-risk countries in Africa to disasters. It ranks third among African countries most exposed to multiple weather-related hazards and suffers from periodic cyclones, droughts, floods, and related epidemics.

Speaking at the event, the Minister of Public Works, H.E. Joao Machatine thanked development partners for their support to the Government and people of Mozambique in responding to the emergency and reconstruction following the cyclones. He commended UNDP for its strong support and commitment immediately after the disasters. Minister Machatine stated, “I wish to thank UNDP for this initiative. This will have an impact on the affected populations. When we talk about rebuilding infrastructure it is paramount that we also focus on rebuilding people’s lives and their livelihoods. This Recovery Facility gives a great focus on this aspect. This is very timely, and the Government is committed to ensure that all resources mobilized for reconstruction are well managed with accountability mechanisms based on international standards.”

The UNDP Resident Representative a.i. Alfredo Teixeira expressed his pleasure on signing the programme noting that it is the start of a long journey and UNDP is committed to an enduring partnership with Mozambique. Mr. Teixeira also committed to an action agenda to deliver results including for those left furthest behind. Mr. Teixeira stated, “Building Back Better in these times of climate change is no longer an option but an imperative. We in UNDP stand ready to support the Government in advancing a transformational agenda for Mozambique”.

In line with the Post-Disaster Needs Assessments (PDNA), the Facility will adopt a comprehensive approach to effectively meet the needs of the disaster affected population in the Provinces of Sofala and Cabo Delgado in coordination with key development actors to ensure Mozambique’s rapid restoration of development pathways in a manner that builds resilience.

Mr Teixeira noted that UNDP is committed to working with development partners and with members of the UN Family playing a key role in implementation. Development partners expressed a keen interest in participating in this facility. The EU Head of Development Cooperation in Mozambique, Ms. Isabel Faria de Almeida, in her comments, strongly supported the initiative and the innovative approach.

The Facility was launched in a signing ceremony officiated by Minister Machatine and UNDP Resident Representative a.i. and attended by the UN Resident Coordinator, development partners, government officials, representatives from UN agencies among others.

At disaster forum, storm-hit Mozambique says will seek help to build back better

Cyclone Idai: Building climate and disaster resilience in Mozambique and beyond

Words into Action guidelines: Build back better in recovery, rehabilitation and reconstruction