Expect the unexpected and prepare for it 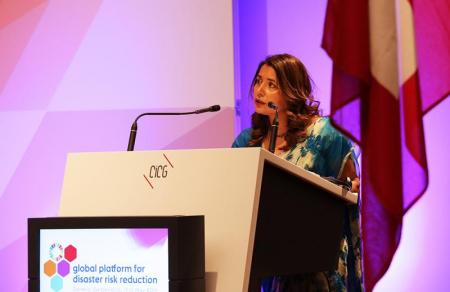 A series of High Level Dialogues kicked off at the Global Platform yesterday with a discussion on progress made in implementing the global plan to reduce disaster losses, the Sendai Framework for Disaster Risk Reduction.

To date, 116 countries have started using the Sendai Framework Monitor to report against their progress on reaching the seven Sendai targets.

While noting that significant progress has been made in reducing mortality from disasters, Kirsi Madi, Director of the United Nations Office for Disaster Risk Reduction, noted that much more needs to be done on other targets, especially target (d) which relates to reducing damage to critical infrastructure.

Ms. Madi said: “We should always strive for zero casualties in any disaster setting and continued improvements in multi-hazard early warning systems, disaster preparedness, risk governance and strengthened institutions, are all key to the successful implementation of the Sendai Framework.

“Other metrics are not so good. We saw in Nepal and Haiti that where building codes are not implemented the consequences of a large earthquake can result in many lives lost and millions of people displaced and homeless.

“Last year 17.2 million people were internally displaced by disasters, mainly extreme weather events. It is notable that almost twice as many people are displaced each year by natural hazards compared to conflict.”

Setting the tone for the discussion and injecting urgency into the debate, Malina Mehra, “Nothing remains certain…Surprise is the new normal; expect the unexpected and prepare for it.”

Participants at the high-level dialogue on the opening day of the Global Platform for Disaster Risk Reduction 2019 called for a broad and pluralistic approach to disaster risk reduction in today’s context of greater frequency of natural disasters and harmful effects of human activity on the environment and survival of species.

“We have to come to a single conclusion that development is impossible without eliminating risks,” noted Feliks Tsolakyan, Minister of Emergency Situations of Armenia.

Despite the grim reality, speakers advocated optimism. “There is a surge of youth activism, reminding us that the future is theirs and that they will fight for it,” Ms. Mehra noted.

The Sendai Framework, the 2030 Agenda and the Paris Climate Agreement have shifted the political context in response to socioecological and socioeconomic crises. They are hard fought achievements that call for the transformation of our world. Member States were making greater effort to measure the disaster losses in order to have a benchmark and measure progress in the next 11 years in reducing losses, whereas the UN reforms for the 2030 Agenda mark important institutional reforms geared at multi-agency delivery.

“The responsibility was no longer on Member States, but on all of us,” Ms. Mehra emphasized. “Risk is everybody’s business. Goodbye to the old hazard-by-hazard compartmentalized approach; hello to the new system of a broad pluralistic approach.”

The meeting also heard feedback from the 2018 regional platforms outcomes which were reported on individually in the news section last year.

Time is running out for a world at risk