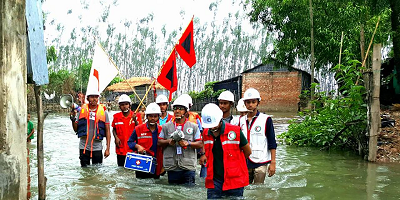 To save lives, countries must customize how messages from their early warning systems reach at-risk populations.

This was the key takeaway from the Asia Pacific Forum for Sustainable Development side event on improving the “downstream” aspects of early warning systems.

This session was organized by the UN Office for Disaster Risk Reduction (UNISDR) and focused on the “last mile” of communication which pertains to all processes and mechanisms in place to deliver warning messages to at-risk populations.

“We have a responsibility to tailor our approaches to the needs and situations of those most at-risk and to ensure they receive these messages, understand them, and know how to act on them,” said Ms. Loretta Hieber Girardet, Head of UNISDR Asia-Pacific.

Ahead of the event, a multi-agency and stakeholder review of Sustainable Development Goal 13 had concluded that there was weak progress in the region on combating climate change which is not good news given that countries are likely to face more frequent and extreme weather events putting pressure on early warning systems.

The event featured a presentation of a study commissioned by UNISDR on the downstream performance of Indonesia’s early warning system in response to last year’s devastating Sulawesi earthquake and tsunami, which killed approximately 2,100 people, making it the deadliest disaster of 2018.

Speaking on behalf of the researchers who lead the study, Ms. Irina Rafliana, of the Indonesian Institute of Sciences, stated that many people failed to heed the warning messages to evacuate because of social and institutional issues. As a result, the study calls for an end-to-end tsunami early warning system that seeks to strengthen every part of the system, especially the “last mile.”

“There are upcoming regulations on multi-hazard early warning systems in Indonesia and we need this study to be one of the reference points for the downstream component because the draft at this point is heavily focused on the structural upstream component,” said Ms. Rafliana.

Other presenters, such as RIMES (the Regional Integrated Multi-Hazard Early Warning System for Africa and Asia), showcased how they used multiple channels and forms of communication to reach diverse populations and end-users such as farmers.

Examples included the use of social media, simplifying and customizing forecasts to specific sectors, translating messages into local languages, and the use of local volunteers who understand local perceptions and culture. The latter is especially important when trying to reach marginalized groups, such as refugees in camps.

Summarizing these efforts, Mr. Ahmadul Haque, Director of Cyclone Preparedness Programme in Bangladesh said: “our goal is not just reaching the ‘last mile’ but the last metre.”