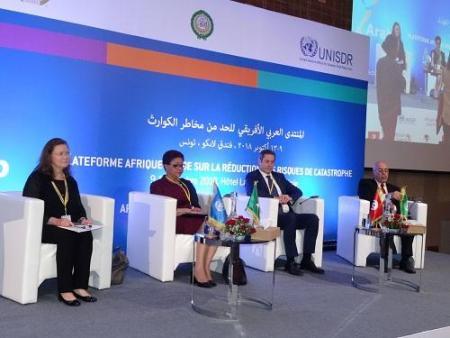 The focus at the opening today of the first-ever joint Africa-Arab Platform on Disaster Risk Reduction was on moving to action on reducing disaster risk and disaster losses across the two regions.

Noting the challenges of climate change and conflict, she said the two regions combined accounted for 10.4 million people internally displaced by conflict last year and that a further 1.3 million were displaced by weather-related hazards in the region.

Across the two regions, 20 countries have so far aligned their national strategies to the Sendai Framework for Disaster Risk Reduction, the global plan for reducing disaster losses.

Ms. Madi said: “This is especially important as we near the 2010 deadline for achieving target (e) which seeks a substantial increase in the number of countries with national and local strategies for disaster risk reduction.”

The two regions have also started to embrace use of the Sendai Framework Monitor, she said.

To date, 18 African and Arab States have started to upload data on mortality, numbers of people affected, economic losses and damage to critical infrastructure.

She stressed the need to strengthen implementation of the Sendai Framework in a manner which recognises the links with the Paris Agreement and the Sustainable Development Goals.

Ambassador Josefa Sacko, Commissioner for Rural Economy and Agriculture, African Union, urged participants: “We have a lot of papers on our shelves but  need to pass to action.”

Ambasador Sacko added: “The event provides a unique opportunity for governments to reaffirm their political commitments and increase domestic investment to implement the Sendai Framework.”

She said it was not sustainable to rely almost entirely on the European Union to fund the region’s disaster risk reduction programme.

“This should be a challenge to all of us, especially our governments to mobilise more domestic resources and invest in DRR, as a matter of survival and principle.”

Abdellatif Abid, Assistant Secretary-General of the League of Arab States, said the Arab road map to implement the Sendai Framework had received the full backing of the Arab Heads of State.

It was his hope that the Platform would be an incentive to action for countries that have not yet done so to create national disaster loss data bases and to produce national and local strategies for disaster risk reduction.

Dr. Riadh Mouakhar, Minister of Local Affairs and Environment, shared his personal experience of being caught up in the recent floods which took eight lives in the Nabeul region of the country following torrential rain.

Tunisia is working closely with UNDP at local level to strengthen capacity of towns to prepare for disasters. A government review of local authority codes has led to a decision to integrate disaster risk reduction into their activities and to establish an insurance to cope with urban risk.

More about the Sendai Framework Monitor