Climate change is driving up forced displacement by disasters 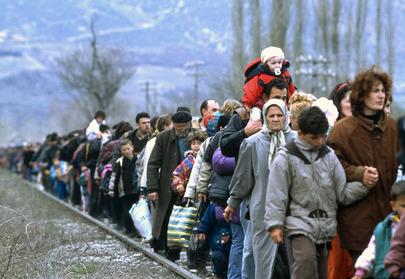 If there was a SDG18, it might well coalesce around the concept of ‘Resilience for All.’

As it is, the concept of resilience is fundamental to achieving all of the SDGs, seeking as they do to strengthen people’s ability to survive, cope and thrive on this planet.

Over the last couple of months, I have met and heard from politicians and civil society representatives from over 100 countries meeting in regional platforms for disaster risk reduction in the Americas, Europe and Asia.

All take the Sendai Framework for Disaster Risk Reduction 2015-2030 as their manifesto, providing guidance and a gateway towards coping with a world where inclusion is under threat, disaster displacement is an everyday occurrence, urbanization is proceeding at breakneck speed and the earth’s resources are being used up at an alarming rate.

Building ‘resilience for all’ seems to be the underlying theme, be it for the most vulnerable people, the displaced, or for those affected by rapid urbanization which ignores the principles of good land use and safe building codes.

We have had wide-ranging discussions on subjects as diverse as resilient infrastructure, the role of eco-systems, the protection of livestock, accessibility to multi-hazard early warning systems, public-private cooperation and working with informal settlements.

A key issue that surfaces time and again is concern over disaster displacement. This is now a chronic issue which needs to be addressed if we are to make progress on making cities and human settlements inclusive, safe, resilient and sustainable as SDG 11 calls for.

Just in the last week, my own country Japan has had to cope with the most extensive disaster event since the Great East Japan Earthquake and Tsunami in 2011. The floods and landslides have caused over 200 deaths or missing, great disruption to normal life and highlighted once more how even the best disaster-prepared countries in the world can be blind-sided by extreme weather events fueled by climate change.

My heart it torn to see the tragic images that are emerging from Japan, and my thoughts are with those who have lost their loved ones and are now living under extremely difficult conditions.

Millions of people in Japan were ordered to vacate their homes earlier this month and forced displacement because of disaster events, usually a flood or a storm, is now a chronic problem in many parts of the world.

Consistently over the last ten years, more people have been displaced by natural hazards than by conflict. According to the Internal Displacement Monitoring Centre, last year conflict and disasters displaced 30.6 million people within their own countries and this included 18.8 million people displaced by disasters in 135 countries.

We note a number of things about how efforts to build societies resilient to disasters are falling short.

First, it is the poor who are disproportionately affected by these events, often they are people forced to live on flood plains or in marginal areas which lack resilient infrastructure, access to water and sanitation, and other basic services.

Second, we are becoming too reliant on evacuation as a solution to saving lives and minimizing the injuries and ill-health which can accompany an extreme weather event or an earthquake when what is required is that we become better at managing the risks which drive these events before disaster strikes.

Third, it is time to act on the realization that we are living with unsustainably high levels of risk given what we know about the likely increase in intensity and frequency of extreme weather events linked to climate change, and population growth in hazard exposed areas.

These are just some of the reasons why I have been emphasizing two issues in particular in my speaking engagements at these recent regional meetings: the need for inclusion, and the importance of local strategies for disaster risk reduction wherever there is a human settlement.

If we do not include all sections of society in our planning for prevention and risk management, then we will see some groups suffer disproportionate loss of life not because they have been deliberately discriminated against but because their voices have not been heard and their needs have been overlooked.

We are getting better at disseminating early warnings, organizing evacuations and providing emergency aid and shelter as part of efforts to build urban resilience but we need to make a much greater effort to prevent displacement and find long-term solutions which reduce the risk of it happening.

Vital to this effort is ensuring an increase in the number of countries with national and local strategies for disaster risk reduction by 2020, a key target in the global plan for reducing disaster losses, the Sendai Framework.

Disaster risk is best managed at the local level where the results will quickly show. One outward sign that this is increasingly entering the mainstream is the growing number of municipalities who are opting to join UNISDR’s 4,000-strong Making Cities Resilient Campaign.

We need more countries to follow the examples of Mongolia and Bangladesh which have signed up all their cities and towns to the campaign.

Resilience for all does not come without effort. The future is unfolding before our very eyes; we cannot afford a half-hearted response.

Climate change, migration and displacement: the need for a risk-informed and coherent approach

Ready or not, climate change, and climate displacement, is happening - expert

Human rights, climate change and cross-border displacement: the role of the international human rights community in contributing to effective and just solutions