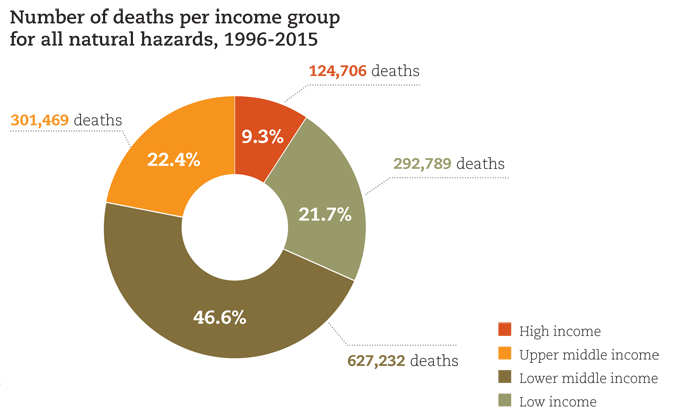 Analysis of twenty years of data on 7,056 disaster events in which 1.35 million people died, shows that earthquakes and tsunamis are the biggest killers overall, followed closely by climate-related disasters, and 90% of disaster deaths occur in low and middle-income countries.

The report, “Poverty & Death: Disaster Mortality 1996-2015” was issued today on International Day for Disaster Reduction in support of a campaign to reduce global disaster mortality especially in poor communities.

“On this International Day for Disaster Reduction, I call on all Governments to work with civil society and the private sector to move from managing disasters to managing risk. Let us move from a culture of reaction to one of prevention and build resilience by reducing loss of life.”

Death tolls in disasters are directly related to income and development levels. Low and middle income countries accounted for 1,221,490, of the overall 20-year death toll.

Low income Haiti, which has suffered a devastating earthquake in 2010, three years of drought fuelled by El Niño, and last week’s Hurricane Matthew, lost more lives to natural hazards than any other country both in absolute terms and relative to size of population.

All three suffered the impact of the three megadisasters of the last twenty years: the Haitian earthquake, 2010; the Indian Ocean Tsunami, 2004; and Cyclone Nargis, 2008.

High income countries do figure in a list of the twenty most deadly disasters of the last 20 years because of the 2003 heatwave across Europe which accounted for large loss of life in Italy, 20,089; France, 19,490; Spain, 15,090 and Germany, 9,355. Japan also figures on the list because of the 2011 earthquake and tsunami which caused 19,846 deaths, according to the EM-DAT database maintained by the Centre for the Epidemiology of Disasters (CRED) based at the University of Louvain, Belgium.

With three weeks to go before the COP22 Climate Conference in Marrakech, the analysis highlights that the number of weather and climate-related disasters more than doubled over the past 40 years, accounting for 6,391 events in 1996-2015, up from 3,017 (1976-1995).

“Earthquakes and tsunamis caused 56% of total global disaster mortality over the last twenty years but in 15 of those 20 years the greatest loss of life was due to extreme weather events.”

Dr. Debarati Guha-Sapir, head of CRED, commented: “These mortality statistics have implications for the achievement of the Sustainable Development Goals. Disaster deaths are a strong indication for poverty and under-development and 90% of disaster deaths happen in low and middle-income countries.

“These statistics are an indicator of overall trends, they do not present the full picture as there are gaps in the reporting on disaster mortality particularly for heatwaves which have become much more prevalent over the last twenty years.

“The statistical trend shows that on average 327 people died per disaster in low income countries in the past 20 years, almost five time more than the average toll in high-income countries where economic losses are higher but systems are in place for early warnings and better preparedness.”

The full report, a collaboration between the UN Office for Disaster Risk Reduction and CRED, is available below.