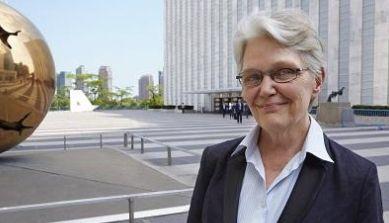 The dust is beginning to settle after the breakthrough adoption of the Paris Agreement at the U.N. climate change summit.

My own soundings over the last week or so suggest there is a reasonable degree of consensus that it is a strong statement of intent by world leaders to reduce disaster risk and, in particular, the future impact of climate-related disaster events which have affected over 4 billion people since the first U.N. climate conference in Berlin in 1995.

Mitigation of climate change by cutting emissions is the ultimate form of disaster risk reduction as it prevents the creation of new risk while also trying to reduce the stock of existing levels of risk.

There is no doubt that if we succeed in holding the increase in the average global temperature to well below 2°C above pre-industrial levels while pursuing efforts to limit it to 1.5°C, this will make an enormous contribution to reducing disaster losses in the future.

However, in a world that has already warmed by 1°C on average, where sea-levels are rising and Arctic Sea ice and glaciers are disappearing, adapting to the impacts will require an unrelenting, immediate and long-term effort, no matter how much the bar is raised in terms of reductions in greenhouse gas emissions.

There is also now an opportunity to ensure that the work that will commence on climate change adaptation is coherent with the ongoing efforts around the world to reduce disaster losses from the consequences of other risk drivers which it would be foolish to view separately from climate change.

Indeed, the interlocking nature of all risk drivers is made very clear in the new Sendai Framework for Disaster Risk Reduction. It was the first pillar of the post-2015 development agenda to be put in place when it was adopted in March at the Third UN World Conference on Disaster Risk Reduction, held in Sendai, Japan.

It’s a long list. The disaster risk reduction community was apprehensive that the Paris Agreement would treat climate risk in - less than splendid - isolation from the rest.

Specifically, the Sendai Framework seeks to reduce mortality, the numbers of people affected, economic losses and damage to critical infrastructure such as schools and hospitals - efforts which will be reflected in the sought-for substantial increase in the number of countries with national and local disaster risk reduction strategies by 2020.

This needs to interlock with the tasks set out in Article 7 of the Paris Agreement, particularly the formulation of “nationally determined prioritised actions, taking into account vulnerable people, places and ecosystems”.

The Sendai Framework also calls for a substantial increase in the availability of, and access to, multi-hazard early warning systems and disaster risk information by 2030, an activity mentioned in Article 8 of the Paris Agreement which also references the resilience of communities, livelihoods and ecosystems.

One example of the synergies we should expect from the complementary nature of risk reduction and adaptation agendas emerged at the Paris conference in the shape of a French government initiative on Climate Risk Early Warning Systems (CREWS). It is backed by the U.N. Office for Disaster Risk Reduction, the World Meteorological Organization and the World Bank’s Global Facility for Disaster Reduction and Recovery (GFDRR).

The governments of Australia, Canada, France, Germany, Luxembourg and the Netherlands have already agreed to give more than $80 million to equip up to 80 countries with better climate risk early warning systems. Considering that some 90 percent of all major recorded disasters are weather-related, this is a very practical measure towards saving lives and reducing disaster losses.

As outlined in the Lima to Paris Action Agenda, climate change action can also impact positively on rapid urbanisation to ensure it takes account of the environment and avoids placing people and critical infrastructure in locations that are inherently unsafe for living and working.

Some 60 percent of the area expected to be urbanised by 2030 remains to be built. The challenges and the opportunities are great.

The creation of new risk must be avoided, and every effort made to reduce existing levels of risk whether it is environmental, technological or biological in nature. The New Year summons us to a post-2015 agenda based on action and implementation.

This article was first published by the Thomson Reuters Foundation