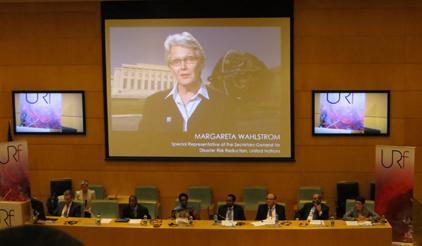 Addis Ababa - Delegates from over 30 countries in Sub-Saharan Africa along with development partners, academics and civil society are meeting at the launch of the Understanding Risk and Finance Conference in Addis Ababa, Ethiopia.

The Conference is expected to come up with major action points on disaster risk financing to build resilience to disasters in Africa by the time it closes on Friday, November 20.

Overall, annual global economic losses are estimated by UNISDR to be in the region of $300 billion. According to the Belgium-based, Centre for Research into the Epidemiology of Disasters, only 16.7% of official records in Africa over the last 20 years include information about economic losses making it difficult to calculate overall losses in the region.

The conference is hosted by the African Union Commission and supported by the World Bank, as part of the Programme ‘Building Disaster Resilience to Natural Hazards in Sub-Saharan African Regions, Countries and Communities’, cooperation between the European Union and the African, Caribbean and Pacific Group of States.

The head of the UN Office for Disaster Risk Reduction, Margareta Wahlström, in her opening statement, spoke of the importance of multi-hazard approaches in a changing climate in the context of the Sendai Framework for Disaster Risk Reduction which was adopted earlier this year as a global blueprint for reducing disaster risk and achieving a substantial reduction in disaster losses.

The Commissioner for Rural Economy and Agriculture in the African Union Commission, Ms. Tumusiime Rhoda Peace, highlighted the level of investments in Africa on disaster risk reduction including risk insurance, risk financing and other measures.

At a subsequent High Level Dialogue on Building Financial Resilience in Africa, Prof. Stephen Dercon from Oxford University laid out a model for early action based on collective action by financial institutions, development actors and governments.

Mr. Chris Lane from the International Monetary Fund and M. Mohamed Beavogui from African Risk Capacity highlighted the significance of risk insurance for low income economies. Chris Lane also informed of a USD 700 million precautionary programme being implemented in Kenya that can be used to respond to shocks of a certain magnitude.