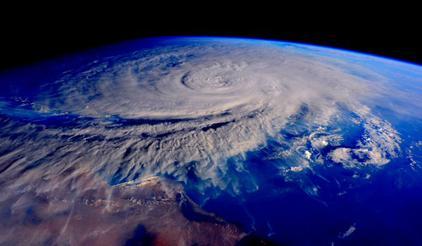 Cairo - A rare powerful tropical cyclone Chapala in the Indian Ocean is heading towards Arabian Peninsula southern costs of Oman and Yemen. It is expected to make a land fall on eastern provinces of Hadramout and Shabwa in war-torn Yemen early Tuesday. The storm reached category 4 during the weekend.

On Sunday, the cyclone killed at least two people in Socotra island of Yemen, located in the Indian Ocean 340 km from Yemen, as reported by Al Jazeera. Dozens of homes were also damaged and destroyed on the island.

The US Joint Typhoon Warning Centre (JTWC) reports that Chapala is expected to make landfall at about 06:00 GMT on Tuesday morning.

The JTWC reported that the storm system was tracking a path that would take it close to the Yemeni port city of Mukalla, which has a population of about 300,000 people.

The sea was very rough with maximum wave height of 10 metres, heavy rains and very strong wind up to 170 km/hr. According to Oman Meteorology, latest satellite images indicate that the Tropical Storm Chapala is centered about 450 km away from the coastal areas of Omani governorate of Dhofar. The surface wind speed around the center has decreased to 83-93 knots (150 to168 Km/h).

The Omani and Yemini governments have issued warnings and urged residents to evacuate coastal areas as cyclone Chapala approaches. The Public Authority for Civil Aviation in Oman has advised the public to take necessary precaution and to stay away from low lying areas and to avoiding crossing wadis. The Authority also advised the fishermen and other sea-users to avoid putting to sea and to follow latest and updated bulletins from the National Multi Hazard Early Warning Centre of Oman.

Chapala originated in the Indian Ocean on Wednesday, October 28, and rapidly intensified during the following days reaching category 4, becoming the strongest tropical cyclone of the Indian Ocean. The storm had the potential to bring three or four times the average yearly rain in just a day or two over parts of eastern Yemen and southwest Oman, the Weather Chanel informed.

Tropical cyclones in this part of the world are extremely rare and only a few have hit the Arabian Peninsula since reliable records started, according to Nasa Earth Observatory. The last cyclonic storm to strike the coastlines of Oman and Yemen was Keila in 2011, which resulted in widespread floods and 14 fatalities.

Previously, in 2008, a rare tropical cyclone brought devastating flooding to Yemen and killed at least 100 people. 20,000 others were displaced in the south of the country and over 50% of the total population in the affected areas had their livelihoods destroyed or significantly affected, mainly in Wadi Hadramout. In 2007, cyclone Gonu inflicted more than 50 deaths on Oman.