Women in Parliament back Sendai 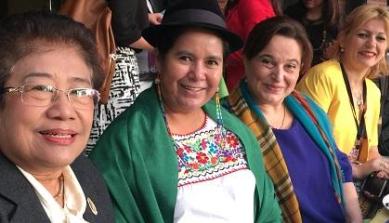 Representatives from 20 parliaments and other organizations came together to discuss the initiative in Mexico City this month at the Women in Parliament Global Forum.

Ms. Silvana Koch-Mehrin, founder of WIP, highlighted the importance of working towards reducing disaster risk, since all countries in the world are affected by natural disasters, it is a common goal to build and strengthen communities resilience to man-made and natural hazards.

She told participants of the Sendai Framework’s precise call for members of parliaments to support and implement the Framework as an important stakeholder in encouraging investment in resilient infrastructure and fostering improved risk governance.

During an exchange of views, the MPs discussed their respective countries’ risk and hazard profile and, addressing governance, the varying roles played by development ministries and national agencies in promoting disaster risk reduction at home and abroad.

They also emphasized the need for politicians to receive sound advice from disaster risk reduction professionals. In addition, they said that shifting to proactive prevention was crucial.

MPs expressed interest in having women champions for DRR within this proposed caucus. They also requested more awareness raising for MPs and some raised the question of how to include DRR considerations in budget planning.

Dr. Zipporah Kittony, a senator from Kenya said: “DRR is a very important subject, recently we had forest fires during elections and this raised attention. Politicians are now working towards preparedness instead of response only. The country is expecting El Nino, parliamentarian committees are working on it. This is a good initiative and we would like to be part of it”.

Dr. Lourdes Tibán, parliamentarian from Ecuador said: “My country suffers from many types of hazards, right now we are at risk of the Cotopaxi volcano eruption, it can happen anytime and we should be prepared.

“We should take into account indigenous knowledge as mentioned in the Sendai Framework. We, indigenous people believe in the relationship between people and mother-nature and this relationship must be respectful, otherwise we will be suffering the consequences, disasters. I would like to join this initiative and will take it to my parliament for discussion.”

The meeting was co-chaired by Ms. Koch-Mehrin and Ms. Liliana Lopez Ortiz, focal point for the UNISDR Parliamentarian Initiative, who actively invited participants to join this initiative and start working towards safer societies.