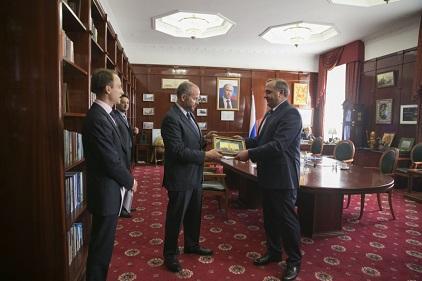 Moscow — The Russian Federation is kick-starting its implementation of the Sendai Framework for Disaster Risk Reduction, seeing it as a key priority for the state, the government told an international congress in Moscow this week.

Mr. Vladimir Puchkov, at the helm of the Ministry of Affairs for Civil Defence, Emergencies and Elimination of Consequences of Natural Disasters (EMERCOM), underlined that the number and magnitude of disasters is growing, but that human losses and economic damage cannot be considered acceptable.

All available resources and capacities to reduce disaster risk must be used to build on existing efforts at the national and local level, he told the International Congress on Global and National Strategies of Catastrophic and Disaster Management, which drew 70 countries.

“Protection of people and territories against disasters in Russia is the priority task of the state. The Russian Emergencies Ministry continues its consistent work for improvement of the national disaster management system,” Mr. Puchkov said.

Russia’s disaster risk management is coordinated by the country’s National Platform for Disaster Risk Reduction, which also ensures links with sustainable development. All of the country’s financial and economic investments plans are coordinated closely with EMERCOM to ensure that they are risk-sensitive.

Stretching from the Baltic to the Pacific, with a population of some 145 million, Russia faces an array of risks. Flooding and wildfire are its top natural hazards, followed by extreme high and low temperatures, storms and earthquakes.

Over the past 10 years, disasters have claimed over 5,600 lives in Russia, mostly due to extreme temperatures, while economic losses have exceeded US$800 million.

The Sendai Framework, adopted by the international community at the Third UN World Conference on Disaster Risk Reduction in March, seeks to bring about substantial decreases in disaster deaths, numbers of people affected, and economic losses around the globe over the next 15 years.

Mr. Puchkov said that Russia is in the process of implementing all the voluntary commitments that it made during the World Conference and that, in cooperation with UNISDR, it will also supporting the implementation of the Sendai Framework abroad.

Building an accurate picture of disasters and risks – both past and present – is crucial to help countries understand the threats they face and thereby to ensure the effective implementation of the Sendai Framework.

Strengthening international cooperation is the key to taking risk assessment and humanitarian response to a new level, said Mr. Puchkov.

“This would require closer integrated of forecasting, rescue, protection and re-covery high technologies,” he noted.

He also stressed the need to strengthen coordinating role of the UN in risk re-duction and resistance to disasters.

The Moscow congress, which ended on Wednesday, identified the scientific sector as a key to successful disaster risk reduction, and showcased capacities and good practices developed not only by Russia but also Kuwait, Indonesia, Italy and other risk-prone countries around the world.

At the congress, Mr. Bouloukos underlined that in order to achieve the ambitious goals set by the Sendai Framework, it is crucial to take an all-of-society approach to disaster risk reduction, where the scientific sector, in particular, plays a fundamental role.

He further acknowledged Russia’s strong contribution to crafting the Sendai Framework, especially the stronger focus on prevention and preparedness in the disaster risk management cycle.