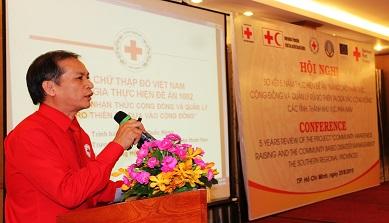 Ho Chi Minh City, Viet Nam- On 25 September 2015, the Viet Nam Red Cross Society, in collaboration with the Department of Water Resources, Ministry of Agriculture and Rural Development and the International Federation of the Red Cross and Red Crescent Societies (IFRC), organized the conference to review five years of implementation of the national community based disaster risk management (CBDRM) and community awareness raising project (project 1002) for Southern cities and provinces.

The conference was attended by nearly 100 representatives from the Ministry of Agriculture and Rural Development; the Office of the Government; Ministry of Finance; Ministry of Education and Training; the Viet Nam Red Cross Society; The Vietnam Women’s Union; Red Cross Chapters; departments of Agriculture and Rural Development and the Committees for Disaster Prevention and Control and Search and Rescue of 19 Southern cities and provinces. The IFRC, the Japan International Cooperation Agency, Save the Children, Oxfam and other nongovernmental organizations with ongoing community based disaster risk management activities in Vietnam also attended the event. The conference was co-chaired by the Deputy Director General of the Department of Water Resources, Under-Secretary General of the Viet Nam Red Cross Society, and Deputy Director of the Disaster Management Centre.

Representatives from the participating agencies at both headquarters and local levels shared their experience in implementing the project over the past five years, including challenges, solutions and direction for the upcoming period.

“The CBDRM 1002 programme plays a very important role in disaster preparedness and response,” said Tran Quang Hoai, Deputy Director General of the Department of Water Resources. “Local governments as well as relevant government agencies and civil organizations have been very active in implementing the project.” He lauded the support from mass organizations non-governmental organizations, especially the Viet Nam Red Cross Society, while stressing the importance of collaboration and cooperation among the relevant agencies in order to issue policies that would create a more conducive environment.

One of the main concerns raised in the conference is the lack of clear guidance on the implementation of the 1002 CBRM programme. “In addressing this, the Viet Nam Red Cross Society has been supporting the Disaster Management Centre to develop a regulation which would legitimize and provide guidance for the implementation of the national CBDRM project for all participating agencies,” said Tran Quoc Hung, director of the disaster management department, Viet Nam Red Cross Society. At the conference, the participants also commented on the draft regulation, with an emphasis on the need for clarification of human resources structure, financial procedures, and cross-cutting issues including gender, disabilities and minority groups. The regulation is expected to be enforced by the end of 2015.

Commenting on gender inclusion in disaster risk reduction, Tran Thi Thu Thuy, office manager of the Vietnam Women’s Union, asserted: “Most disaster risk reduction practitioners know very little and are ambiguous about gender equality. They think it’s a women’s only issue. In fact, gender equality has to do with both men and women. In disaster and climate change, anyone can be affected. However, the impact on men might be different from that on women, girls and boys given their different roles in society.”

In the upcoming period, the Vietnam Women’s Union will strengthen its communication activities to raise awareness on the role of women in disaster risk manangement, as well as empower women in this area.

The conference is part of the 17-month project ending December 2015 called Enhancing the capacities of disaster risk reduction (DRR) practitioners in Viet Nam through the consolidation of best practices and lessons learnt for community based disaster risk management, vulnerability capacity assessment (VCA) and disaster response mechanisms (DIPECHO 9), implemented by the Viet Nam Red Cross Society with support from the IFRC, the German Red Cross and the Spanish Red Cross.

The project is made possible with financial support from European Commission’s Humanitarian Aid and Civil Protection department (ECHO) as part of its strategy to document the lessons learned and support the consolidation of capacity and systems for national, provincial and district level community-based disaster risk reduction action in Viet Nam.

The national CBDRM programme has been implemented by the Ministry of Agriculture and Rural Development with support from relevant government agencies since 2009. The Viet Nam Red Cross Society has supported the Ministry since 2011 in the implementation of the project. Since then, it has implemented CBDRM activities in 555 communes and wards in 36 cities and provinces of Viet Nam. In 2014, the National Society also issued its own CBDRM Framework.