Uganda gets ready for El Niño 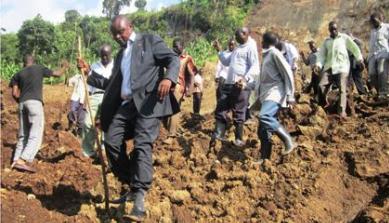 Kampala – The Government of Uganda is training its military and police officers in disaster preparedness in anticipation of the effects of El Niño-enhanced rains over the mid-September 2015 to January 2016 period.

To reduce exposure to hazards such as landslides, the Government has appealed to more than 100,000 families - about 800,000 people - who are at risk of landslides in the country’s mountainous regions to relocate to safer areas.

Uganda’s Meteorological Authority has warned of the likelihood of floods, landslides, strong winds and lightning in parts of the country.

“During the next four months of the El Niño rains, my appeal to the people at risk of landslides is for them to find relatives and friends whose homes are in safe locations. The Government will support the host families with essential relief supplies to enable them to meet the additional burden,” said Mr. Hillary Onek, Uganda’s Minister for Relief, Disaster Preparedness and Refugees.

In July, the Government of Uganda announced plans to resettle up to 100, 000 people who are living in landslide-prone areas in the hilly eastern districts of Bududa, Bulambuli, Sironko and Manafwa.

“We have begun a process of training and equipping the UPDF [Uganda People’s Defense Forces] and police officers with skills and tools to give support in case of landslides and massive floods,” said Mr. Hillary Onek, Uganda’s Minister for Relief, Disaster Preparedness and Refugees.

“The group will be on standby in the anticipation of landslides and massive flooding in the coming El Niño season. We are also likely to face destructive windstorms, lightning and waterborne diseases,” added Mr. Onek.

At least 2,000 personnel under the "Civil-Military Disaster Response Group" will help strengthen preparedness among households in landslide and flood-prone areas mainly in eastern, southwestern and western Uganda.

The personnel will be deployed to the Mt. Elgon and Mt. Rwenzori regions, and other at-risk areas to build local community capacities in disaster preparedness and risk assessment and to create awareness on the need for possible evacuations to reduce hazard exposure.

Uganda’s National Policy for Disaster Preparedness and Management has a strong civil-military cooperation component that requires 20 percent of armed forces (including police and military personnel) to be trained in emergency and disaster management.

“We shall work with other government departments to deal with expected upsurges of epidemics related to the rainy season, in planting trees, clearing and reducing blockages of drainage systems, de-silting drainages and other water channels to curtail flooding,” added Mr. Onek.

“We shall pre-position construction equipment like excavators and bulldozers in areas prone to landslides.”

“More than before, Uganda is focusing on emergency preparedness and early warnings before events occur in order to reduce the impact of disasters,” stated Mr. Michael Dunford, the acting WFP representative in Uganda.

“In line with the Sendai Framework for Disaster Risk Reduction and building on the Government’s disaster management framework and its current efforts to enhance the institutional framework for disaster risk management, including strengthening of NECOC [the National Emergency Coordination Centre], WFP is assisting in strengthening the government’s early warning systems, contingency planning, supply chain management and food/nutrition response planning, including monitoring and evaluation,” said Mr. Dunford.

In September 2014, WFP and other UN agencies at country and regional level conducted a simulation exercises to test Uganda’s preparedness levels.

Gaps in the national early warning system, emergency preparedness and response - including the inability to pre-position emergency items - inadequate storage and transport management and problems with targeting affected populations were identified.

“To assist in this area, WFP provided the Office of the Prime Minister with a GEONETCast system to monitor the potential for disasters. The system is in operation already at NECOC,” said Dunford.

The GEONETCast is a global network of satellite-based data dissemination systems providing environmental data to a world-wide user community.

Uganda last experienced severe weather due to an El Niño event in 2006, which caused massive flooding in the Teso, Lango and Acholi regions.

According to Uganda’s Minister for Water and Environment, “The predicted rains require action in sufficient time and in an appropriate manner to avoid the loss of life and destruction of infrastructure and property.”