Source(s):  United Nations Office for Disaster Risk Reduction – Regional Office for the Americas and the Caribbean (UNDRR AM) 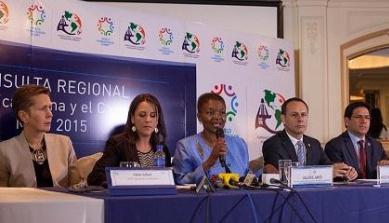 Panama City - Latin American and Caribbean countries have etched the Sendai Framework for Disaster Risk Reduction into a regional declaration that sets out their common position ahead of a key United Nations humanitarian summit next year.

The Declaration of Guatemala lauds the Sendai Framework as the benchmark for comprehensive risk management in the post-2015 global developmental agenda, saying it is the “main guideline for a comprehensive approach to disaster risk management in promoting sustainable development”. Disaster risk reduction and development are intrinsically linked, given that “poverty, inequality, hunger, underdevelopment, exclusion, social marginalization and discrimination are causes that exacerbate vulnerability” to hazards, the declaration notes.

The declaration was the result of a Latin American and Caribbean regional gathering known as the “VII Meeting on International Mechanisms of Humanitarian Assistance”. The meeting feeds into preparations for the World Humanitarian Summit in 2016, and which was held two months after the international community adopted the Sendai Framework at the World Conference on Disaster Risk Reduction in Japan. The accord, which will guide risk reduction efforts through to 2030, is the successor of the Hyogo Framework which when it was adopted in 2005 was the most encompassing international disaster risk reduction roadmap ever.

“Humanitarian action should be more than just delivering aid after a disaster. It should empower people, especially women and girls, to live with dignity,” said Ms. Valerie Amos, the outgoing UN Under-Secretary-General for Humanitarian Affairs and Emergency Relief Coordinator.

The Sendai Framework builds on what were already keys element of its 2005-2015 predecessor: ensuring that all players work together to reduce vulnerability and that disasters are not simply viewed as a matter of humanitarian operations after the event. The new framework also places greater emphasis on reducing the creation of new risks – for example those associated with climate change or rapid urbanization – with the goal being to make societies more resilient to the challenges they face.

“With the addition of the Sendai Framework in the Declaration of Guatemala, humanitarian actors contribute to building resilience at all levels, and it reinforces the growing tendency to link the issues of risk management to development processes and not only to the response,” said Mr. Ricardo Mena, Head of UNIDR’s Regional Office for the Americas of the UN Office for Disaster Risk Reduction (UNISDR).

Latin America and the Caribbean are particularly vulnerable to meteorological hazards such as hurricanes and floods, as well as geological threats including landslides and earthquakes.

According to research by UNISDR on 16 countries in the region, nine out of 10 people were affected by disasters between 1990 and 2011. Over the same period, estimated economic losses were a minimum of US$53 billion. The 16 countries were: Bolivia, Chile, Costa Rica, Colombia, Ecuador, El Salvador, Guatemala, Guyana, Honduras, Jamaica, Mexico, Nicaragua, Panama, Peru, Uruguay and Venezuela.

The role of at-risk communities is fundamental to tackling such threats.

“We can no longer think of the men and women affected by conflict and disasters as mere victims. They are the first to respond and mobilize. They continue long after the flow of foreign aid has diminished,” said Ms. Jemilah Mahmood, Head of World Humanitarian Summit Secretariat of the Office for the Coordination of Humanitarian Affairs.

The regional consultation process in Latin America and the Caribbean was rated by Mahmood as the “widest conducted to date in all of the regions,” and will provide key inputs to the World Humanitarian Summit to be held in Istanbul, Turkey in May 2016.

The region has vast experience of the region in the areas of cooperation, emergency management and disaster reduction. In preparation for the World Humanitarian Summit, consultations have been conducted to gather the perspectives of the communities, people affected by humanitarian crises, governments, regional organizations, the UN system, humanitarian and development organizations, as well as academic and private sectors from 31 countries. Nearly 5,000 people have been consulted, half of whom have been affected by disasters.

Besides helping inform the debate ahead of the World Humanitarian Summit, the Sendai Framework is also feeding into other major global gatherings this year: on financing for development, in July; on sustainable development; in September; and on climate change, in December.