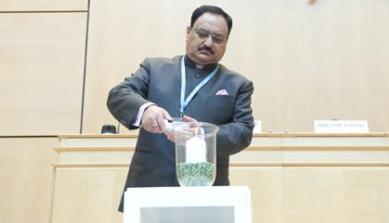 Geneva - In a statement to the 68th World Health Assembly, the UN Office for Disaster Risk Reduction (UNISDR), today said that the new Sendai Framework for Disaster Risk Reduction “has fully embraced the concept of health resilience and recognized that it must be a key area of focus for disaster risk reduction in the immediate future if we are to succeed in reducing existing levels of risk, and to avoid the creation of new risk.”

Ms. Chadia Wannous, UNISDR’s health focal point, expressed UNISDR’s condolences to the Government and people of Nepal on the loss of over 8,000 lives and said: “The April 25 earthquake and continuing seismic activity in Nepal have underlined the importance of disaster risk reduction efforts in hazard prone areas around the world and how critical it is to ensure a full understanding of the health consequences of such events. “

“The Sendai Framework is an opportunity for countries to shift their focus from managing disasters to managing risks which requires a better understanding of risk in all its dimensions of vulnerability and exposure, a key priority for disaster risk reduction over the next fifteen years.

“The Framework goes beyond natural hazards. It maps out a broad, people-centred approach to disaster risk reduction which applies to small and large-scale disasters caused by natural or man-made hazards as well as related environmental, technological and biological hazards and risks.

“The health status of disaster-exposed populations is central to the achievement of the overall goal of the Framework of achieving a substantial reduction of disaster risk and losses in lives, livelihoods and health.

“A strong health sector is a vital part of building people’s resilience to disasters. Priority 3 of the Sendai Framework calls for public and private investment in disaster risk prevention including in health facilities and other life-saving and harm-reducing measures.

“The importance of this can be definitely understood against the backdrop of Nepal earthquake where three district hospitals and hundreds of health posts were destroyed.”

Ms. Wannous stressed that the Sendai Framework calls for building back better and “enhanced cooperation between health authorities and other relevant stakeholders at global and regional levels” to strengthen country capacity for disaster risk management for health, to implement the International Health Regulations and to build resilient health systems.