Mongolia forges ahead on Sendai Framework 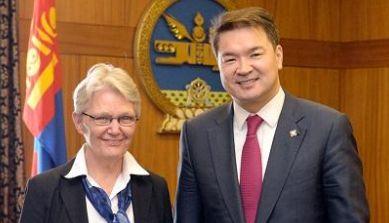 Mongolia is also establishing a National Platform for Disaster Risk Reduction, developing a national disaster loss database and has already translated the Sendai Framework into the national language.

In his dialogue with Ms. Wahlström today, Prime Minister Saikhanbileg emphasised: “We have the clear intention and commitment to integrate disaster risk reduction into our development plans.”

Mr. Khurelshukh said policy development for disaster risk reduction must be science-based and called for a collective approach from government and non-government actors.

The Deputy Prime Minister stressed the importance of a multi sectoral and multi stakeholder coordination mechanism to integrate disaster risk reduction in to development as the country goes about establishing a National Platform for Disaster Risk Reduction.

Ms. Wahlström was “pleased to see that Mongolia has taken a lead in beginning discussions on how to implement and make use of the Sendai Framework at national level.

“The national system to respond to fight disaster has been built up over the decades and it continues to be strengthened through investment in human capacity and resources for response. The challenge now is to move into managing the risk of disasters, over and beyond managing the disaster event. Prevention is better than cure and definitely more cost effective.”

She said that as a nation Mongolia has learned from severe winter weather or “dzuds” which have highlighted the country’s vulnerabilities. Ms. Wahlström said she was encouraged that the Government is committed to mainstreaming disaster risk reduction and climate change adaptation into sectoral policies and programmes.

The UN Resident Coordinator, Ms Sezin Sinanoglu emphasized that our development choices today determine whether we are disaster prone tomorrow. “Disaster risk reduction is a cross cutting multi sectoral challenge and can be fully realized if it is integrated through development”, she said.

The High Level National Development Dialogue comprised ministers from environment and finance; parliamentarians; the President of the Red Cross Society of Mongolia; and development partners such as The World Bank. The discussion underlined that the political leadership is crucial for risk sensitive investment and coordination is key for coherence among disaster risk reduction, sustainable development and climate change.

Ms. Wahlström also took the opportunity of her visit to meet ministers from the Ministry of Environment, Green Development and Tourism; Ministry of Finance; Ministry of Health and Sports; Ministry of Construction and Urban Development; Vice Minister of Education; Deputy Speaker of Parliament; Deputy Mayor of Ulan Bator city; President and Secretary General of Mongolian Red Cross in order to promote further the implementation of Sendai Framework for Disaster Risk Reduction.