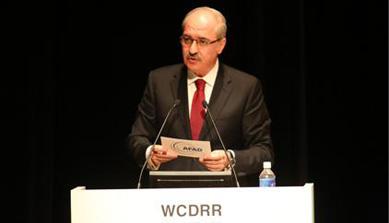 Sendai – Turkey has vowed to make all 80,000 of the country’s schools disaster-proof by 2018, senior officials told the World Conference on Disaster Risk Reduction today.

“Turkey pledges that by 2018, all schools in Turkey will be safe learning facilities,” said Fuat Oktay, the country’s Disaster and Emergency Management Director-General, speaking at the formal launch of the Worldwide Initiative for Safe Schools (WISS).

Turkey has been a key mover behind the WISS, which was unveiled informally at an international conference in Ankara last year. The country has bitter experience of earthquakes, notably the Izmit tragedy during which around 17,000 people died as buildings crumbled. In 2000, it launched a landmark programme to protect schools from future disasters.

Oktay underlined that over the past 15 years, the Turkish authorities have successfully retrofitted 70 percent of the country’s existing schools and ensured that freshly-build facilities are earthquake-resistant. Given that tougher planning rules came into force eight years ago, the government is also carrying out thorough checks on all schools that were part of the programme between 2000 and 2007. That process will be completed by 2017, Oktay told the World Conference.

The programme means much more than simply ensuring that school buildings stand up to an earthquake, Turkey’s Deputy Prime Minister Numan Kurtulmus told the World Conference.

“Children determine the kind of country and the world in which we will live in the future,” Kurtulmus said, noting that disaster-risk education was also crucial because children act a conduit for information into wider society, meaning that safer schools make for safer homes.

“Raising awareness has a multiplier effect for the efficiency of implementing disaster risk reduction actions. We’re building a culture of disaster sensitivity at all levels of society,” he added.

Resistant school buildings can also offer shelters in the event that a community is struck by an earthquake, and help prevent children’s education from being disrupted by disaster, thereby lessening the social impact.

Other countries are also firmly in favour of the WISS.

The Philippines is one of the most disaster-prone in the world, facing repeated typhoons and flooding. It is home to 21 million students, spread across 40,000 schools. The Department of Education has a dedicated disaster risk reduction unit, and is committed to the “build back better” principle for school facilities, said Laguda.

“Build back better for us includes building back the lives of our learner, teachers and parents,” he added.

“The government is putting all its resources into the issue of attacks on schools,” he told the World Conference, pointing to steps such as fencing off school buildings, providing guards, training teachers to deal with crisis situations, and moving students to areas out of the danger zone.