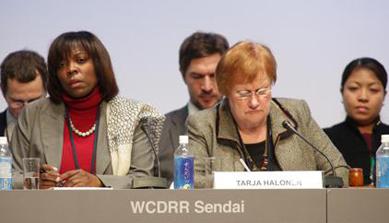 Prime Minister Abe praised the “wisdom and knowledge” of women. He illustrated the point by quoting a group of women from the Iwakiri District, of the host City of Sendai, who had sprang into action after the Great East Japan Earthquake of 2011: “No matter how much the ground shakes, we will remain calm in our hearts.”

“Women possess the wisdom and knowledge needed to protect their families from disasters. Furthermore, they are capable of providing attentive physical and psychological care for the victims of the disaster, who have to face up to many different challenges following the disaster,” Prime Minister Abe said.

“The power of women is absolutely indispensable for restoring communities that have been devastated by disasters, and each time I visit the disaster-affected areas, I meet women who are working hard to promote local activities, despite being victims of the disaster.”

The Prime Minister revealed significant progress in inclusive disaster risk governance in Japan over the period of the Hyogo Framework for Action.

“We are currently creating a structure in which women will be participating in the decision-making processes regarding disaster risk reduction even in ordinary times. We are also seeing an increase in the participation by women in local firefighting organisations.”

The Prime Minister said “we are launching concrete projects in nations around the world” and would build on existing efforts to promote women’s leadership in disaster risk reduction in such partner countries as Fiji, Solomon Islands, and other Pacific island nations.

Prime Minister Abe concluded his remarks with a rallying call for a greater leadership role for women in disaster risk reduction: “In order for us to create a society that is truly resilient and able to withstand natural disasters, it is essential that we make women the driving force behind such efforts. This is something that I think we all need to bear in mind and focus on.”

According to the UN Office for Disaster Risk Reduction, while progress has been made in the implementation of the HFA, it is widely recognized that serious gaps in delivering on gender equality and women’s rights in disaster risk reduction efforts. Engagement and leadership of women as change agents in their societies are still often overlooked in disaster risk management, where women are often categorized as a vulnerable group.

WFP Executive Director Ms. Ertharin Cousin underscored that the “global reset” beginning today in Sendai must include steps to place women at the centre of disaster risk reduction efforts. Without those steps, none of the proposed ambitious goals would be met.

Ms. Cousins said disasters indeed exacerbated pre-existing barriers and inequalities that women faced, putting them at greater risk of injury and death. Ms. Cousin said it is time cast aside the restrictive view of women as vulnerable and merely accepting aid. Indeed women must be recognized for who they are and the roles they undertake, which are central pillars of disaster response and recovery.

UNFPA Executive Director, Dr. Babatunde Osotimehin, said the Sendai Conference offers a new opportunity for the world to galvanize around a common disaster risk reduction agenda and commit to collective actions that put women at its centre.

What is needed is requisite political will to make ensure that women’s voices were enhanced and participation ensured. All such efforts must bolster women’s rights, included sexual and reproductive health rights, he said.

Mayor Ms Emiko Okuyama Sendai, recounted the experience of the Great East Japan earthquake in 2011. “We realized that the people making decision for disaster preparations on day-to-day basis are mostly men. It reminded us that women need to be part of every decision-making forum with regards to disaster risk reduction and be active leaders in the area,” she said.

The Partnership Dialogue was co-chaired by H.E. Ms Sanae Takaichi, Japan’s Minister of Internal Affairs and Communication and H.E. Ms Loren Legarda, Senator, of the Philippines with the support of Moderator Mr. Riz Khan.