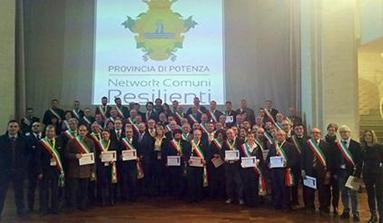 Potenza - The Italian Province of Potenza was recognized at the weekend as a role model for inclusive resilience by the UN Office for Disaster Risk Reduction for its unique network of 100 cities which are all enrolled in the Making Cities Resilient Campaign.

UNISDR Chief Margareta Wahlström met with the President of the Province, Mr. Nicola Valuzzi, and presented him the role model certificate in an event that was covered extensively by print and broadcast media. In the past, the region has lost thousands of its citizens to earthquakes and landslides.

Ms. Wahlström singled out for particular mention the work which has been done in the earthquake prone region to ensure that 84 schools have been made safe “and that urban planning includes actions aimed at environmental protection, security and local awareness.”

Potenza Province has proven its ability to guide and lead its 100 cities under a network approach in order to keep the municipalities and the community active and informed about disaster risk management by supporting and coordinating projects directly with communities.

“These open dialogues with the community and major groups aim at raising awareness and enhancing individual capacities through knowledge sharing so that communities can be fully engaged in decision-making processes. Activities such as this are what makes Potenza province a Role Model Province for Inclusive Resilience,” said Ms. Wahlström.

She said that the current text of the new Post-2015 framework for disaster risk reduction which will update the Hyogo Framework for Action, “is very clear on the importance of local governments for reducing risk to ensure community safety. It also stresses the importance of cooperation and learning from each other’s practical experience.

“The importance of developing effective global and regional campaigns as instruments for public awareness, education, and of course action, is also underlined as a key element to promote a culture of disaster prevention, resilience and responsible citizenship, generate understanding of disaster risk, support mutual learning and share experiences.”

She was pleased that major groups from the community would be participating in a two-day conference opening today to discuss the province’s resilience strategy. “You will explore ways to contribute to HFA implementation and how can governance and local level engagement in disaster risk reduction be improved.”

Ms. Wahlström met with representatives of Major Groups including older persons, children and youth, people with disabilities, farmers, women, migrants and civil protection voluntary organizations who all made the case for an inclusive approach to building resilience to disasters and demonstrated impressive levels of engagement in disaster risk reduction.

The regional system of civil protection has encouraged the growth and qualification of voluntary organization. Currently there are 73 associations and 3,250 members operating in various sectors such as logistics, firefighting, radio communications, medical rescue, mountain and caving rescue, sea or inland waters rescue and light aircraft. They are also engaged in emergency planning, drills, early warnings and a range of prevention activities.