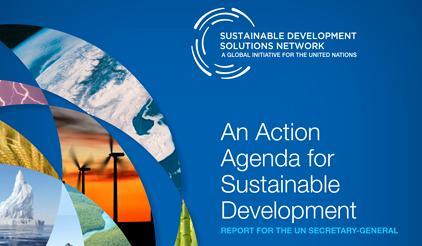 New York - UNISDR Chief Margareta Wahlström today welcomed a proposal that "resilient cities" should be one of ten top global priorities in the post-2015 development agenda.

Ms. Wahlström said: "UNISDR has been running the Making Cities Resilient Campaign for three years now and our experience of working closely with both capital cities and small municipalities tells us that urban resilience needs to be at the top of the global development agenda. Many Mayors and local governments around the world are leading the way in reducing risk."

One of the ten goals -- Goal 7 -- is to "empower inclusive, productive and resilient cities". Under this goal, one suggested target (Target 7c) is to ensure the integration of "climate and disaster resilience into investments and standards".

The world's governments agreed last year at the historic Rio+20 Summit to adopt universally applicable Sustainable Development Goals (SDG) in 2015. To support this agreement, the SDSN has mobilized global technical expertise to identify ten "priority challenges" or potential goals, each accompanied by a set of targets, which can guide global efforts to achieve sustainable development during the period 2015-2030.

A stand-alone goal on cities will serve to "mobilize and bring together the efforts of multiple actors and stakeholders such as local authorities, national governments, businesses, knowledge institutions and civil society across a range of urban issues such as disaster risk reduction and climate change adaptation", according to the Report.

"It is essential that the world rallies around a post-2015 global goal to advance urban resilience and minimize creating new disaster risks and adding to the economic losses caused by increased exposure to natural hazards."

From 2011 to 2020 alone, investments in urban development are projected to increase by 67 per cent globally. Much of this new urbanization will unfold in hazard-exposed regions threatening global resilience and sustainability unless governments and businesses start incorporating disaster risks into decision-making.

The recently released report by the Secretary-General's High Level Panel of Eminent Persons on the post-2015 agenda also echoes the SDSN report's emphasis on addressing urban challenges. In no uncertain terms, it proclaims: "Cities are where the battle for sustainable development will be won or lost."

The recommendations of the SDSN and the High Level Panel reports are expected to serve as critical inputs to the deliberations that governments are undertaking to decide on a development roadmap that will go into effect in 2015.