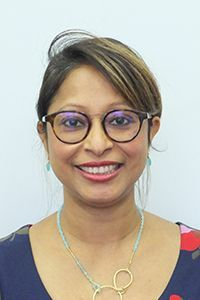 University of Leicester Expertise:  Nibedita’s expertise includes exploring the complexity of small-scale and large-scale natural disasters and context-specific disaster risk management underpinned by the theories of vulnerability, human security, disaster risk reduction, organisation and sustainable development in high and low-middle income countries. This engages with the interlinked issues of health, gender, livelihoods, policy analysis, governance, and resilience. Her particular strengths lie in conducting interdisciplinary research, as well as her ability to bring this knowledge into teaching and policy change. Presently Nibedita is interested in the agenda of reducing disaster deaths (see her latest book Avoidable Deaths). She is hosting a Rutherford Fellow to extend the framework for avoidable deaths in the context of Bangladesh.

Nibedita has BA in English Literature from the University of Delhi (1998), MA in Social Work from the Tata Institute of Social Sciences (2001) and Ph.D. in Sociology from Warwick University (2007). After obtaining her Ph.D. in Sociology (funded by the Ford Foundation’s International Fellowship), Nibedita joined Northumbria University as an ESRC-Research Associate for a two-year ESRC-DFID funded research project called ‘Exploring the Meaning of Health Security for Disaster Resilience in Bangladesh’ (2007-2009). In 2010, Nibedita returned to the Department of Sociology at Warwick University to teach the MA in Gender and International Development. After completing her teaching at Warwick, Nibedita joined the Department of Management and Security at Cranfield University in August 2010 as a Lecturer in Disaster and Emergencies. At Cranfield, Nibedita lectured in several Executive MSc and MBA programmes and was also involved in the capacity building of the Indonesian Defence University in Jakarta and Pakistan’s Ministry of Defence in the UK. In 2012, Nibedita joined the University of Leicester. Currently an Associate Professor in Risk Management, Fellow of the Higher Education Academy, External Examiner and a Programme Director for the MSc in Risk, Crisis and Disaster Management, Nibedita has also been involved in the capacity building of the primary health care system in Belkuchi/Bangladesh during a flood. Nibedita is regularly invited to review journal articles, research proposals, Ph.D. examination and for special talks. Nibedita has provided input to the UNISDR’s Global Assessment Report 2015. Nibedita is the author of Caste, Class and Gender in Multiple Disasters (2009, VDM Verlag) and Avoidable Deaths (2018, Springer Nature). Nibedita's research and enterprise activities have attracted funding from the Commonwealth Scholarship Commission/DFID, NERC, IPPF, Kansai University, Leicester Institute of Advanced Studies (LIAS) – amongst others.

Dear Nibedita, Do you have any recommendations on how to include the concepts of justice and accountability in DRR policies in a practical way so that those institutions working in DRR will feel positively motivated to coordinate strategies and programmes? Do you see a specific role for civil society in this endeavor and what would that role be? Thank you.

Many thanks for your questions.

The concept of justice (reference here is to Amartya Sen, 2009) gives a vantage point to argue that deaths in disasters are avoidable. When deaths continue to happen despite being avoidable, they are ‘intolerable injustices’ and they require ‘overwhelming priority’ to rectify the existing human systems to reduce deaths. In this vein, the theory of justice enables actors and organisations to dig deep into themselves to acknowledge the fact that mistakes, errors and second order mis-management can happen in not saving lives. Therefore, actors and organisations involved in disaster management systems should actively promote reflection, reflective practices, soft-systems thinking, and complexity thinking to frame problems, as well as solutions that can reduce human deaths. I have provided a short list of sources that identify tools to promote reflection, systems and complexity thinking.

The concept of justice also thrives on ‘social realisations’, which are assessed based on ‘people’s capability’. Capability is the power to do something whether this is related to evacuation prior to a disaster or being able to be well nourished or healthy in everyday life. Social realisation goes beyond the organisational picture and includes the lives that people manage or do not manage to live (Sen, 2009). This theoretical lens gives us the agency to understand everyday vulnerabilities of marginalised groups, as well vulnerabilities of organisations. When organisations fail to fulfil their duties, social realisations can make room for the civil society and citizens “for demands of duty” from the actors and organisations who have failed to protect or save human lives. However, making actors accountable is difficult, particularly considering the poor death reporting systems which are complicated by local context and cultural norms.

How to include the concepts of justice and accountability in DRR policies…?

A few practical recommendations for this are as follows:

1. Introduce the ‘goal’ to avoid disaster deaths in disaster management policies and programmes. Currently, there is a lack of clarity in this regard.

4. Political leadership is vital to promote the idea of reducing disaster deaths in DRR policies and programmes.  When there is proactive political leadership, a disaster response system can be aligned with the goal of saving lives. Additionally, political leadership can also promote a culture of disaster preparedness. In the case of Cyclone Phailin in 2014, Mr. Naveen Patnaik, the chief minister of the Indian state called: Odisha, set a goal of “saving lives at any cost”. Accordingly, all actors and responders organised themselves to achieve this target. In this light, the UN and other international funding organisations could do a great deal by encouraging political leadership to implement the Sendai’s ‘priorities for action’ for effective disaster management.

5. The current practices in documenting the primary (direct) deaths, secondary (indirect) deaths and missing persons are shrouded with confusion and malpractice. The UN and civil societies, in collaboration with national governments, should identify the barriers to death reporting and recording. Solutions to the barriers should contribute towards the process of standardising death reporting and recording systems, nationally. Death records are vital to promoting justice for the deceased and deceased families. Also, authentic death recording and reporting is vital to allocate finite disaster funds effectively to reduce disaster deaths and also to change human behaviour. Although global disaster deaths may indicate that more women die in disasters compared to men, this may not be the case at a national level. My research in Odisha revealed that more men died compared to women in coastal Odisha from 1999 to 2014 (Ray-Bennett (2017) Disaster, Deaths and the Sendai Goal One, World Development, 103(2018): 27-39).

Sources for reflection and systems thinking: