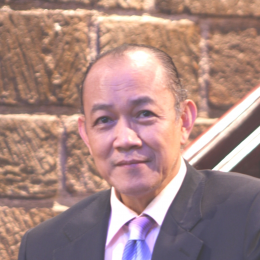 Dr. Serafin (or "Apin") Talisayon is known as the “Father of KM in the Philippines,” after co-founding CCLFI in 1999, starting the first KM course at the University of the Philippines in 2001, and spearheading the establishment of the KM Association of the Philippines in 2002. He is a Chief Expert in KM at the Asian Productivity Organization (Tokyo), the Vice-Chair of the Society of KM Professionals and a member of Entovation 100, a global network of 100 leading KM practitioners. He was KM consultant for the World Bank (Manila), European Union, the Asian Development Bank, the United Nations Development Programme (Bangladesh, Cambodia, Philippines and New York HQ), Islamic Development Bank (Jeddah), the WHO Western Pacific Regional Office, the ILO Regional Office for Asia Pacific (Bangkok), UNISDR (Bangkok and Geneva HQ), IBM Philippines, SEAMEO (Bangkok), the Asian Productivity Organization (Tokyo), the Baganuur JST (Mongolia), Shell Malampaya MMT, Dunamis (Indonesia), Institute of Development Studies (U.K.), IKM Emergent (Netherlands) with EADI (Germany) and the Ambedkar Institute of Productivity (India). Apin’s varied experiences include work for the Philippine Government in knowledge-based development as part of national development strategy. In 1988-1992, Apin set up and developed the Economic Research Group for the Department of Finance’ economic intelligence bureau, which undertook a series of studies in the Philippine political economy. In 1992-1998, he was appointed by President Fidel V. Ramos as Assistant Secretary for Policy of the National Security Council, where he assisted in the formulation of Philippines 2000, President Ramos’ reform and economic strategy for global competitiveness and people empowerment. At NSC, he headed the Policy and Plans Office whose responsibility is to undertake policy research, recommendations and formulations in various development and reform initiatives. He is a member of the Editorial Board of the Knowledge Management for Development Journal. He wrote two books on KM, co-authored two e-books (on KM for poverty alleviation and on post-project knowledge capture), edited four books on KM, and wrote papers on KM for the development sector. He has presented papers in KM conferences and meetings in Jakarta, Taipei, Seoul, Yogyakarta, Kuala Lumpur, Beijing, New Delhi, Hong Kong and Singapore; gave KM lectures in Vietnam, India and Indonesia; and was conference rapporteur of KM conferences in Bangkok and in New Delhi. As Director for R&D at CCLFI he had (i) developed the Learning Organization Diagnostics© and tested it in over 50 organizations, (ii) designed the online KM Practitioner Certification Course of CCLFI featuring practice of 30 basic KM skills and set up its practice website, (iii) tested and compiled low-cost KM workplace practicums in over 50 KM training courses. View his publications at Academia.edu and his KM thoughts in his KM weblog where you can read about “Low-Cost KM Tips,” “Success Factors in KM,” “KM Case Studies,” “Learn from my KM Mistakes,” “KM Framework,” and “Useful Distinctions in KM”.

-How efficiently are the Philippines National Agencies translating knowledge to make it more accessible for Development Organizations, Municipal and Local Governments (such as barangays)?

-And how is the knowledge (assessment, maps, etc.) at Local and Municipal Governments, and NGOs in the Philippines being integrated into the larger, National Knowledge Databases?

I cannot help you on your second question because I am not familiar with how local and national DRR databases are managed.