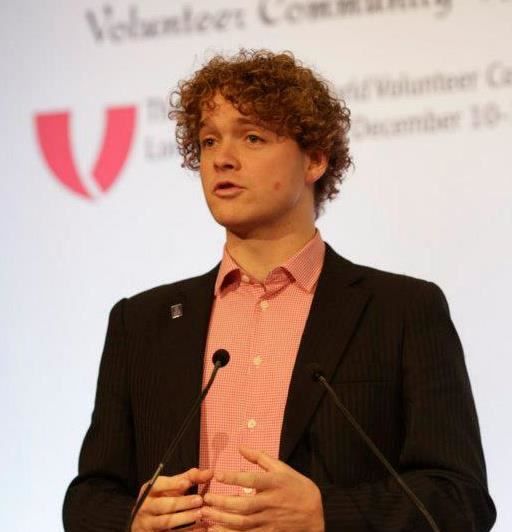 Sam is best known for his work in Christchurch following the devastating earthquakes where he started the now internationally acclaimed 'Student Volunteer Army' movement. While completing the final papers in his law degree, Sam and the Volunteer Army Foundation now work to build on the legacy that 11,000 student volunteers started and work alongside the UN Disaster Office in the build up to the 2015 World Disaster meeting. Sam is a British Council Global Changemaker and Leader of Tomorrow with the 44th St Gallen Symposium. He has received a special leadership award from the Sir Peter Blake Trust and in 2012 was both the PRINZ Communicator of the year and Coca Cola Amatil Young New Zealander of the Year. The collective 'Student Volunteer Army' also received the ANZAC of the Year award in the same year for the comraidship, compassion, courage and commitment demonstrated following the earthquakes.

Young people engaged in social action face a myriad of challenges, sometimes perceived as 'young and inexperienced'. As an able young Kenyan leader engaged in DRR, it's often difficult projecting my voice to direct attention to the DRR agenda. Advice

Thanks for the question Fladwel!
This is a very interesting area to explore. Youth engagement in disaster risk reduction is typically low; and its not just young people who perceived as 'young and inexperienced' in this field filled with 'experts.’
I've found since the Christchurch earthquakes that our local work has provided a strong basis for our work internationally; which is the same in many of the major youth networks around the world. In these networks, such as Global Shapers or Changemakers, young people are encouraged to work on a local project, often a very simple one, which gives youth 'street cred' to advocate at a higher level and get the attention of 'leaders.' The challenge is how young people go from being “included” in DRR, to driving the agenda and both demonstrating and demanding action on a wider scale. ==Political Scientist Dr Bronwyn Haywood (http://growing-greens.blogspot.co.nz/) speaks about this as the difference between dutiful dissent, disruptive dissent and dangerous dissent.
In peacetime, I've found 'adults' can tolerate disruptive dissent where young people are included and come to meetings, sometimes change the agenda and introduce some new ideas. Fundamentally they are still participating in a foreign invited arena and their impact will make people feel better, but not largely alter the outcome. Dr Haywood and I spoke recently about the difference between this, and dangerous dissent. Dangerous dissent is where younger people- perhaps like us - understand our power to organize, object and who won't play by rules and don't necessarily have to anymore.
Now, in most arenas this usually results in negative social action. Though it’s different story in disasters. In disasters, dangerous dissent, where young people assume greater responsibility, break rules that may not make sense, self-organize and take action – despite a lack of permission - is impacting thousands of people in the most incredibly positive way. Whether in Saudi Arabia after the Jeddah floods, in Chile after the earthquakes, or down here in New Zealand the agenda is being shifted by our collective local actions. We have to build confidence and encourage people to assume greater responsibility to see more such initiatives.
In terms of getting our voices better heard, I've found we have to speak in simpler terms. Even mentioning DRR is a barrier, as you would know, since most people have no idea what DRR is!
The key things I often emphasize are: 1) Use the tools in your pockets. Use this technology we have so readily available to mobilise action in new ways, especially around disasters. 2) Make use of the skills of the “unskilled”; those people in our community who are deemed to have no ‘official’ skills or are untrained – such as youth - but have an awful lot to contribute! 3) People are just people. No matter who are you, and what level you are on (President or student), you can find a way to get someone’s attention, as we’re all human, and can work peacefully together.
What is your opinion? I would love to hear your views and priorities from your area of the world.
With the World Conference for Disaster Risk Reduction rapidly approaching, everyone's voices are important and longterm, I hope young people around the world have the confidence, sense of permission and belief in their own abilities to innovate, self-organise and take action on reducing the risk communities face to disasters. www.youthbeyonddisasters.com